How the Deadly 1918 Flu Pandemic Brought Dixie Cups to Easton

Carefully preserved in the archives of the D&L and the National Canal museum are two icons of a revolution: a 1908 container for disposable cups to carry along while traveling by car (if you were rich enough to have one) and from 1918, four of the first paper cups to be called “Dixie.”

It may seem odd to call a throw-away cup an icon, let alone a revolutionary one. But the simple drink-and-toss cup protected millions of people from catching contagious, often deadly, diseases. How? By helping to drive the sickness-spreading water bucket and common cup out of every classroom, office, shop, factory, train station, and railroad car in the country. 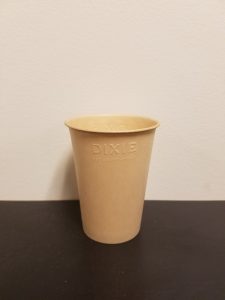 By the 1890s, American doctors and scientists had embraced the germ theory—the knowledge that many diseases are caused by microscopic organisms such as bacteria and viruses. However, most Americans still resisted the idea that something they could not see or smell could make them sick. One of the many social, economic, and political problems that the Progressive Movement of the early 20th century addressed was corralling the spread of contagious diseases. In those pre-antibiotic years, measles, diphtheria, tuberculosis, whooping cough, and scarlet fever were killer diseases that were nearly impossible to treat effectively. Preventing them became a public health crusade, and the paper cup one of its chief weapons.

Who brought the world this tiny-but-powerful tool? Two ingenious and energetic brothers-in-law—Lawrence Luellen and Hugh Moore.

Luellen was a Boston attorney whose client was a physician in need of easily disposable cups for testing the sputum of his tuberculosis patients. Luellen developed a small pleated wax-coated paper cup, and then added to its commercial value by inventing a vending machine that dispensed the cup, filled with cold water, for a penny. His brother-in-law Hugh Moore had moved to Boston to attend Harvard but dropped out to help develop the business. Not entirely disinterestedly, Moore also took up the Progressive campaign to abolish the common drinking cup. In 1908 Moore and Luellen incorporated the American Water Supply Company of New England to manufacture, install, and service the Luellen vendor.

The same year, a Lafayette College biology professor, Alvin Davison, published “Death in School Drinking Cups.” The lurid title was understated, compared to the results of his study of illness in Easton schoolchildren as a result of common-cup contamination. Davison found classroom cups laden with germs that caused everything from colds and flu to diphtheria to chicken pox, which he linked to many, often fatal, cases of the illnesses among the children. Davison’s study was enormously influential, and he testified to the public health-promoting powers of the Luellen vendor several times. Soon, state after state passed laws banning common cups, and railroads took up the cause, installing cup dispensers and a closed tank of water in each passenger car. 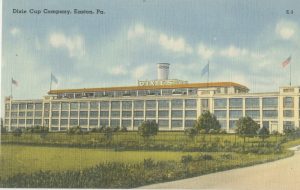 In 1909, Moore and Luellen moved their manufacturing operation to New York City. Sales of their “Health Kup” exploded during the influenza epidemic of 1918 and Moore needed a bigger factory. In 1919, the Individual Drinking Cup Company, makers of the recently re-christened “Dixie Cup,” bought seven acres of farmland for $3,000 an acre in Wilson Township outside Easton and awarded a contract for an 80,000 square-foot, reinforced-concrete factory to a New York construction company. When he moved into the vast new building on April 1, 1921, Moore feared he had “foolishly overbuilt,” but the following decades proved the wisdom of his gamble. Once it was firmly established in Easton, the Individual Drinking Cup Company became a marketing and manufacturing dynamo, whose corporate motto was “We sell health.”

Coming soon: How the Dixie got its name, and why we still gratefully remember Hugh Moore.