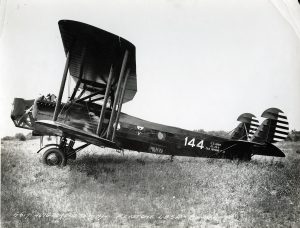 The Keystone LB 5-A light bomber

The black livery of this little bi-plane and the bat-wing bomb symbol on its side look menacing.  With good reason: it’s a war plane.

It is a  Keystone LB 5-A, one of 27  US Army Air Corps light bombers built by the Keystone Aircraft Company of Bristol in the 1920s. Bristol, long the industrial center of Bucks County, was home to major aviation manufacturing through the end of World War II.

In 1925, the Huff-Daland Aero Company bought the site of the abandoned Harriman shipyard, renamed itself Keystone Aircraft, built a large facility on the Delaware River and joined the race to build planes that could cross the Atlantic. Keystone’s Pathfinder plane, named the American Legion, showed great promise but crashed on the take-off of its final test flight, carrying a full trans-Atlantic load of fuel. Both pilots were killed and Charles Lindbergh made his historic flight two weeks later. 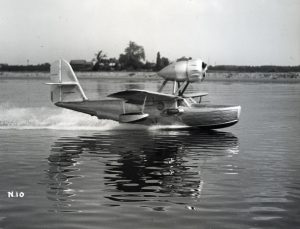 The Sea Bird “flying boat” on the Delaware

Despite that high-profile tragedy, Keystone remained the Army Air Corps’ biggest supplier of bombers, delivering nearly 200 bythe early 1930s. In 1928, the company bought the Loening Aeronautical Engineering Corporation, but the following year the newly renamed Keystone-Loening was bought by the Wright Corporation. This made Keystone a founding member of the legendary Wright-Curtiss Corporation, which was created in the middle of 1929. Keystone continued to make bi-planes until 1932, when a combination of the design’s obsolescence and the ravages of the Great Depression drove it into bankruptcy.

The site on the Delaware was ideal for building airplanes, and the town was home to experienced aviation workers. In 1934, Fleetwings, Inc. moved from Long Island to Bristol to build amphibious planes. The Sea Bird, pictured here on the Delaware and looking a bit like an ancestor of the Starship Enterprise, was an all-stainless steel “flying boat.” It was a technological success, but its $25,000 price tag was too steep for the Depression economy, and only six of the planned 50 planes were built. One Sea Bird is still air-worthy, though, and makes occasional appearances at air shows in Minnesota.