June 21, 1970 was a rainy day. But it didn’t dampen the spirits of a crowd of more than 100 people who came out for the formal dedication of the Canal Museum at the Forks of the Delaware on Route 611 in Easton. The new museum, a combined project of the Pennsylvania Canal Society and the Hugh Moore Park Commission, reflected the growing interest in canal restoration and preservation at the time. 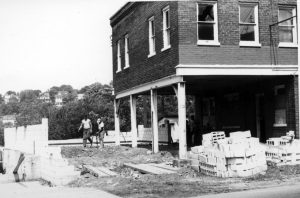 The Canal Museum under construction

The Pennsylvania Canal Society (PCS) was formed in 1966 by five men, Clayton “Bill” Yoder, William Shank, Harry Rinker, Don Wright, and Ted Sherman. Rinker agreed to be president, and Sherman, a former mule boy and boat captain, donated  “a suitcase full of photographs and artifacts” that was the start of the PCS collection. “Ted Sherman’s conch shell horn was the first accession,” says Rinker.

The City of Easton set up the Commission the following year to restore and preserve the land and canal that had been part of Section 8 of the Lehigh Navigation. Dixie Cup founder and philanthropist Hugh Moore had given the city the bulk of the funds to buy the land from the Lehigh Coal & Navigation Company, and his architect son, Hugh Moore Jr., and two colleagues drew up a master plan for the area. 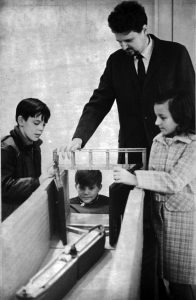 In 1968, Harry Rinker was hired as the first director of Hugh Moore Parkway. Unfortunately, at his first meeting with the Commissioners, who included Hugh Moore, he served refreshments in specially purchased fine glassware. Moore indignantly pointed out that his disposable cups had made the Parkway and Rinker’s job possible, and the next day, a large supply of paper cups was delivered from the Dixie Cup factory on 25th Street. 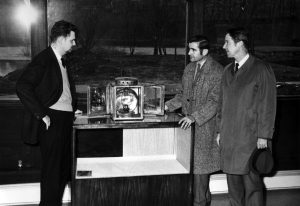 Rinker and Craig Moore with a nighthawker

Neither the city nor the Parkway had any interest in collecting and exhibiting canal photographs and artifacts, Rinker remembers. So, Hugh Moore Jr. and his colleague Heikki Elo bought the building on Delaware Drive formerly owned by C. K. Williams Company. After being renovated and enlarged to 1400 square feet, the PCS collection and more donations from members and several surviving canal boatmen were installed as exhibits. Bill Yoder set up the library and archive on the second floor of the building, alongside the offices for Rinker and a secretary.

With admission prices of $.25 for adults and $.10 for children, the museum soon became popular. School programs and lectures and films for adults were well attended. Interest in historic canals was at its height, and the museum quickly became known as a resource for groups that were taking on canal projects in several states. 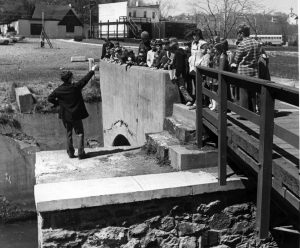 Despite a temporary emergency move of all the museum exhibits to the second floor when Hurricane Agnes flooded the Delaware and Lehigh Rivers in 1972, the Canal Museum at the Forks of the Delaware established firm roots as the anchor of the land that became Hugh Moore Park.

Stay tuned for more information about the National Canal Museum’s fascinating history throughout our anniversary year. You can help us celebrate the 50th anniversary of the Museum by sharing your own recollections here!