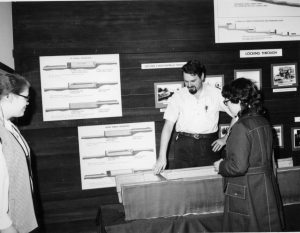 Until well into the 1920s, people who lived in the cities, towns, and rural areas along the Lehigh and Delaware Canals were very familiar with canal boats, the mules that pulled them, the large kerosene lanterns, small iron stoves and large feedboxes on their decks, the loud hoots of conch shells and the locks that lifted and lowered boats on their way. 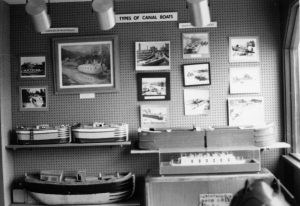 But by the time the Canal Museum at the Forks of the Delaware opened in 1970, memories of those days had faded, and few people who had worked on the canals were still alive. For most visitors to the museum, it was their first look at a transportation system and a way of life that had disappeared less than 50 years earlier.

Canal museums were a new thing in 1970, and the novelty, coupled with a very low admission price—$.25 for adults and a dime for school kids—made Easton’s Canal Museum on Delaware Drive very popular. 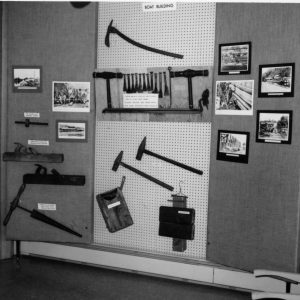 A display of boat building tools and boat construction, many of which are exhibited in the present-day museum

As these photos from the early days of the museum show, lots of artifacts, boat models, paintings, photographs, maps, and drawings were exhibited in a fairly small space. Members of the then-new Pennsylvania Canal Society—many of them former canal boatmen and their families—donated nearly all of the museum’s original collection, grateful that their family heirlooms would be carefully preserved. 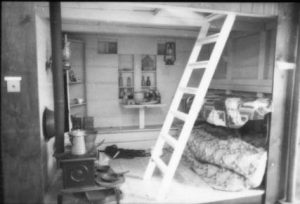 A full-sized replica of a canal boat cabin, installed in the Canal Museum in 1978.

Fifty years later, this preservation—and telling the stories of our canals– is still a major part of the mission of the National Canal Museum and the D&L National Heritage Corridor. 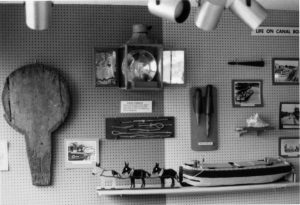 A canal boat “dasher,” the nighthawker lantern that hung from it, a conch shell, a tin horn, rope splicing pins, and a model of a mule team and boat on display. The first four artifacts, and the folk art mule team, can be seen in the present National Canal Museum in Hugh Moore Park.