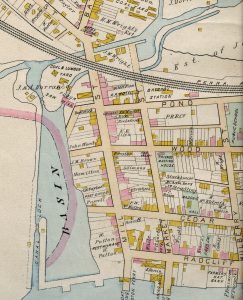 1891 map from the collections of the National Canal Museum

The hunt for the site of Delaware Canal Lock 1

The Delaware Canal is the longest towpath canal still in existence, but several stretches of its southern end are obscured or completely obliterated because of twentieth century suburban sprawl in southern Bucks County.  This is particularly the case in Bristol, which was the southern terminus of the Lehigh and Delaware Canals network. At Bristol, canal boats that carried anthracite from the coal regions were tied into flotillas and towed down the Delaware River to the Port Richmond coal docks in Philadelphia.

The 1891 map below shows the tide lock where boats passed in and out of the Delaware River, the canal basin, Lock 1 (to the left of the word “saw”) where the boat basin narrowed into the canal, and Lock 2, (denoted by >> symbolizing the lock gates) in the extreme upper right corner. After the canal closed in 1931, Bristol Borough gradually filled in the boat basin and canal.

Today, a visitor or D&L Trail user is hard-pressed to find many traces of the canal in Bristol. A few disconnected sections have been preserved, but Delaware Canal’s first three locks and the tide lock are buried.  Fortunately, old maps and 19th and 20th century photographs help us track down what was where on the Canal through Bristol. 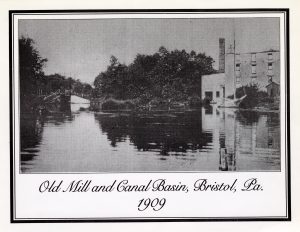 1909 photograph from the collection of the Margaret R. Grundy Memorial Library in Bristol 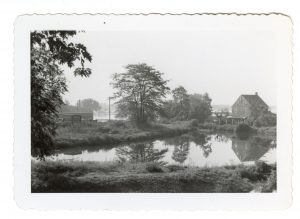 1931 photograph from the collection of the Margaret R. Grundy Memorial Library in Bristol

The photograph on the left was taken in 1909 and shows the entrance to Lock 1 from the Basin.  The one on the right was taken in 1931 and shows the locktenders house at Lock 1. The canal basin is visible in the center left, and the Delaware River is seen beyond the house. The lock is hidden by the bank between the trees. 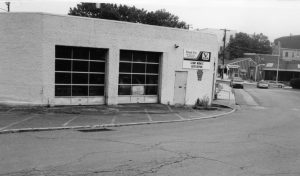 1991 photograph from the collections of the National Canal Museum

Sixty years later, when Lafayette College undergraduate Robert Sobczak shot the photo to the right during a Wildlands Conservancy walk on the towpath in 1991, there was an auto repair garage on the site of Lock 1. Lenny Monk opened his garage on what had become Pond St. in the late 1940s.  Sobczak noted that he took the photo across the street, where the locktender’s house had been. 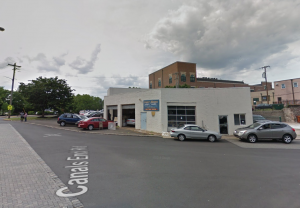 Google Maps image of the site in 2018

The final photograph to the left is a Google Maps image of the same site, taken in June 2018.  The repair shop, which had been run by Lenny Monk’s widow, closed later that year after her death.

While it may be difficult today to find physical remnants of the canal, Bristol’s century as a canal town is remembered in a monument on the banks of the Delaware River in Basin Park.