On June 29, 1980, a conch horn blast by former mule boy, boat captain and locktender Ted Sherman opened the canal festival in Hugh Moore Park.  Known at that time as the Lehigh River Canal Festival, it celebrated the 151st anniversary of the opening of the Lehigh Navigation. 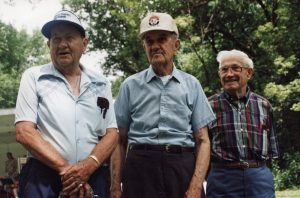 The next few Canal Festivals remained low-key affairs—craftspeople displayed their traditional skills and sold their creations, and there were more musical offerings.  Several former boatmen were honored at the festival in 1981. In 1984, the well-known Lehigh Valley big band Parke Frankenfield and the Dixieland All-Stars played. 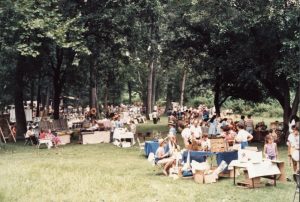 Scene from the 1985 Canal Festival

The 1985 Festival was a big step forward.  With sponsorship by Merchants Bank of Allentown and Easton National Bank and Trust, advertising throughout the area brought 3000 people to Hugh Moore Park. Admission was only one dollar per car, more than 50 traditional crafters displayed their wares, antique gasoline engines were exhibited, and four musical acts, including Dave Fry, performed.

The highlight was the second reunion of the canal boatmen. Once again families named Swope, Arner, and Dreher cruised the waters of the Lehigh Canal.  The boatmen’s reunions continued into the mid-1990s, until one by one they “passed through the last lock.” 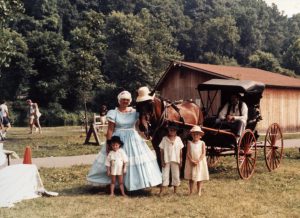 It wasn’t just boat rides at the 1985 Festival – there was a carriage too!

As the festivals grew in popularity, the sponsorship by Merchants Bank increased to cover more entertainers’ fees as well as advertising, while bank employees provided crucial volunteer help for the two-day set-up as well as the event. Wrangling parking for hundreds of cars (and collecting the $3 admission fee per car on Lehigh Drive near the bridge) became a challenge that was aided by the React CB club, Boy Scouts, and the Easton police.

A milestone was reached during the 1987 festival—also the 10th anniversary of the Josiah White— when the 100,000th rider boarded the boat.  Though festival boat tickets cost a few dollars, the ride was so popular that as many as 13 30-minute rides had to be scheduled so over 1000 people (out of 3000 attendees) could enjoy a cruise on the canal. 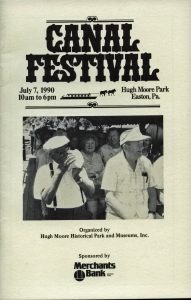 Between 1990 and 1996, most of the Canal Festivals attracted at least 8000 people. This boosted the need for more sponsorship and volunteers, and also led to providing more children’s entertainment and activities. Touchstone Children’s Theater and Ronald McDonald made several appearances. A juried art show was added to the long-standing raffle of original canal art by artists such as Stan McKinney and Richard Schisler. The 1998 Festival featured a 132-pound cake replica of Josiah White.

The final four festivals averaged 3000 or fewer patrons. Instead of one major sponsor, financial backing was spread over as many as 18 different businesses, large and small.  While this reflected the breadth of community support for the museum, the major financial resources that had previously gone to the festival moved to support the new National Canal Museum in Two Rivers Landing. 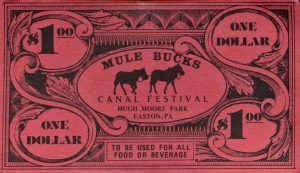 “Scrip” for purchasing food and drinks at the Canal Festival

Many people have happy memories of the Canal Festivals and occasionally someone asks if they will ever be revived in Hugh Moore Park.  Unfortunately, the fact that there is only one bridge with one lane for two-way traffic in and out of the park (there used to be two functional bridges during the Canal Festival era) makes it difficult to accommodate events with large numbers of visitors.  The addition of amenities in the park, such as the bike skills course, the dog park, and even the Emrick Center housing the National Canal Museum, have also decreased the open space available for parking, vendors, and activities.  Everything points towards having smaller events for a few hundred visitors rather than a big one for a few thousand.  In the meantime, the D&L and National Canal Museum are happy to support other canal festivals in the Corridor such as the one in Walnutport and those along the Delaware Canal.