Before the days when you could manage your stock portfolio with the click of a button, shareholders were issued stock certificates to prove their ownership in the company.  Here at the National Canal Museum, we have a number of these documents in our collection, which provide a fascinating glimpse into the business of the canals.  In fact, we have so many copies of Lehigh Coal & Navigation Company certificates that we send them back with the students who attend our Immersion Days field trips so they can do a learning activity with them in the classroom.  While these stock certificates may no longer hold value on the stock exchange, they are highly collectible and provide a treasure trove of historical clues.

Stock certificates were first issued in 1602 by the Dutch East India Company.  Companies mass-printed their own unique stock certificates which served as proof of the shareholder’s ownership in the company and detailed the terms of the investment agreement.  The certificates were typically issued on over-sized, delicate paper – some of those in our collection are no thicker than tissue paper, making them extremely difficult to handle.  They were decorated with extremely elaborate border designs, along with engraved portraiture and landscapes which depicted mythological and allegorical figures.  These artistic depictions added beauty and symbolism to certificates, while making them almost impossible to counterfeit due to the level of detail. 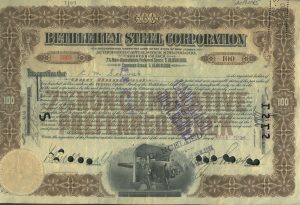 While less intricately decorated than some, this stock certificate for the Bethlehem Steel Corporation is an excellent example of the legal detail contained on the documents.  Issued in 1912, the certificate shows a value of 100 shares at $100 each, totaling a $10,000 investment.  The certificate offers guaranteed dividends of 7% annual interest and points out the total amount of capital stock available in the company: up to $30,000,000 at $100 a share.  The certificate has been canceled, both with a stamp by the Guaranty Trust Company of New York and with punches obscuring the signatures, showing that the certificate is no longer valid. 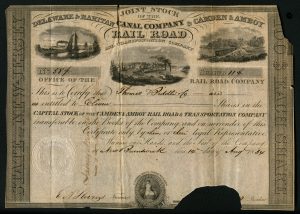 One of the earliest certificates in the collection is from August 1834, for only 11 shares of joint stock with the Delaware & Raritan Canal Company and the Camden & Amboy Rail Road & Transportation Company.  The canal connected the Delaware and Raritan Rivers, significantly shortening the transportation of coal from Pennsylvania’s Anthracite fields to the booming industry in New York City.  The delicate engravings on this certificate show idealized landscapes with coal-laden boats and trains making their way through the countryside, offering a glimpse of how vast and integral the canal transportation system was during the 1800s. 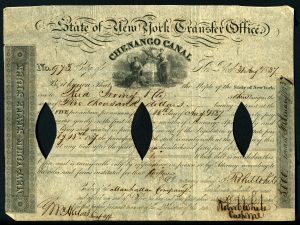 In addition to providing valuable insight into the issuing company, the details hidden within stock certificates hold clues to other contemporary industries, and allow us to dig into the ideological art common to the era.  The following certificate from the Chenango Canal in New York was issued for $5000 in 1834, likely as part of the initial investments to begin construction of the towpath canal which opened in October 1836.  The intricate engraving at the top is typical of 19th century allegorical art in America, portraying themes and symbolism that most educated people would have been familiar with.  The female figures are Justice, with her scales and sword, and a now-unfamiliar depiction of Liberty with a staff topped by a liberty cap, a symbol of freedom from slavery which dates back to Ancient Rome and was popularized in the French Revolution.  Justice and Liberty flank a shield topped with the American Eagle, through which can be seen a sunrise, depicting a bright future ahead.  The Latin phrase Excelsior!, meaning “Ever Upward” appears below the shield, and the background appears to show a canal lock system on one side, and ocean-going ships on the other. 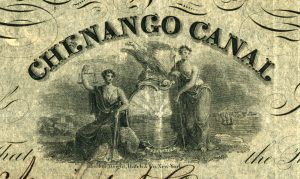 Below the engraving, a credit to “Rawdon, Wright, Hatch & Edson Co., New York” gives us a connection to the leading printing and engraving firm in America at the time, founded in 1816.  The RWH&E Company primarily dealt with financial documents, including bank notes and stock certificates, and held the first government contract for postage stamps.  Links to prestigious companies such as this are important clues to the success of companies which thrived in the rural communities of New York, New Jersey, and Pennsylvania.  Unfortunately, some of the details of this certificate have been lost to the “cut-canceling” technique used, resulting in the three large holes obscuring the text, but it is still a stunning example of the incredible historical sources these certificates provide to us today.