Have you ever heard of Wa-tho-Huk, the greatest Native American athlete of all time?

Jim Thorpe is not just an unusual name for a town.  It’s the name of one of the most famous Native Americans, and one of the world’s greatest athletes, whose final resting place is here in the D&L National Heritage Corridor. 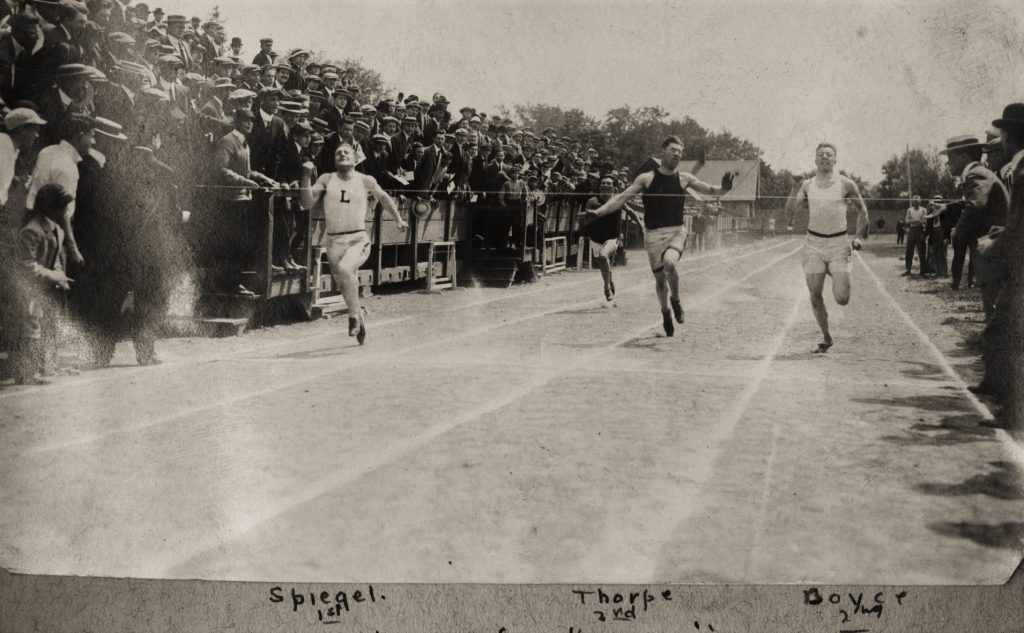 Thorpe almost single-handedly won a track meet for the Indian School against Lafayette College on May 25, 1912. He placed first in six of the fourteen events. This is the only photo of him at the meet, finishing third in a foot race. Special Collections & College Archives, Skillman Library, Lafayette College

Oklahoma-born Jim Thorpe (1888-1953), a member of the Sac and Fox tribe, was the most celebrated athlete of his day.  He first arrived in Pennsylvania as a teenager, attending the Carlisle Indian Industrial School.  From 1907 to 1913, Thorpe dominated every sport—track and field, football (playing four positions: running back, defensive back, placekicker, and punter); baseball, hockey, handball, tennis, boxing, even ballroom dancing. Coached in track and football by the legendary “Pop” Warner, he was a football All-American in 1911 and 1912. The Indian School regularly trounced elite Ivy League and other college teams. In May 1912, Thorpe almost single-handedly won a meet against Lafayette College by taking first place in the high and low hurdles, the high jump, long jump, shot put, and discus throw.

Thorpe’s performance in the 1912 Olympics in Stockholm made him world famous. Photographs of him competing there show his awesome physique, honed by a fierce dedication to both physical drills and mental training. Thorpe visualized every move over and over. “I have an aversion for getting beat,” he said.

At the Stockholm Games, he won gold medals for both the pentathlon and the decathlon, even though he had to compete in the final five events in mis-matched shoes after his own were stolen.  Thorpe’s record for the 1500-meter race—4 minutes, 40 seconds—stood until 1972.

Thorpe was stripped of those medals the following year when he admitted to being paid $2 per game playing semi-pro baseball in 1910. His mistake was playing under his own name, not an alias as many athletes did to earn money while keeping their “amateur” status. Thorpe did not challenge his disqualification and professed not to care, saying “I won ‘em, and I know I won ‘em.”

After the Olympics, Thorpe played on several major league baseball teams and played professional football with the Canton Bulldogs, going from one sport to the other every year until the early 1920s. In 1913-14, his presence on a barnstorming world tour by the New York Giants and the Chicago White Sox drew huge crowds in places that knew nothing about baseball. In 1920, the Bulldogs and 13 other teams formed the American Professional Football Association, which became the NFL in 1923. Thorpe, still playing and coaching the Bulldogs, was its first president; he and the Bulldogs’ owner invented the half time show.  Throughout the 1920s, Thorpe’s name on a sports event guaranteed a sold-out stadium.

But fame did not bring riches. As his athletic skills declined with middle age and the US economy collapsed in the Depression, Thorpe turned to Hollywood.  He worked as a stunt man, and took bit parts, usually portraying either a coach or an Indian. By then he was in the second of his three marriages, and struggling to support eight children.

After Thorpe died penniless in California in 1953, preparations were made to bury him on the Sac and Fox reservation. But his third wife, angry that a promised memorial was vetoed by the governor of Oklahoma, made a deal with the authorities of the merged boroughs of Mauch Chunk and East Mauch Chunk.  Ravaged by the decline of the anthracite industry and hoping to revive tourism, the residents voted to rename the town for Thorpe and build his memorial. Thorpe’s remains rest in a mausoleum east of the Lehigh River, surrounded by monuments to his career, built on earth brought from the Sac and Fox lands and from the stadium in Stockholm where he became the world’s greatest athlete.