What New Year’s symbols did you see last week? Top-hatted babies, noise-makers, and popping champagne corks, probably.  These days, our images that celebrate the passing of the year are pretty paltry. 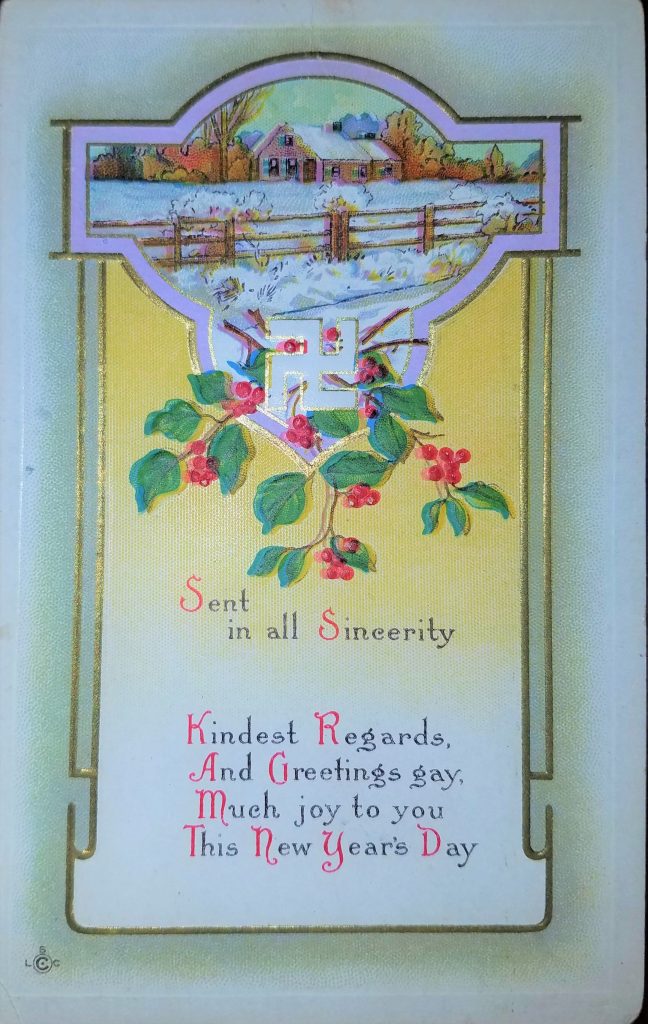 Compare those to the penny postcard New Year’s greetings that our early 20th century ancestors sent to their friends and relatives. Those pictured everything from cherubic children, gold pigs, red-polka-dot-capped mushrooms, cars, dirigibles, forget-me-nots, violets, four-leaf clovers, bluebirds, and clocks to drunks, elves, and swastikas. Such was the wide array of good luck emblems from around the world that conveyed wishes for the coming year. 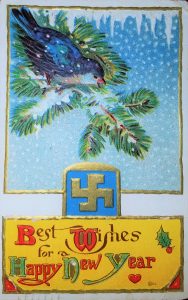 The pigs and the mushrooms are of German origin; in fact, the German phrase for “good luck” translates literally into “have good pig.”  On the other hand, no one is quite sure how the red and white polka dot mushroom came to symbolize luck, especially considering that it is poisonous. Cars and dirigibles were very new in those days, so what better way to wish your friends prosperity and a smooth, fast transit through the coming year?  And the swastika is an ancient religious symbol of success and good fortune that was widely used in America until its corruption by the Nazi Party, and is still a common symbol in Indian and other south Asian cultures. 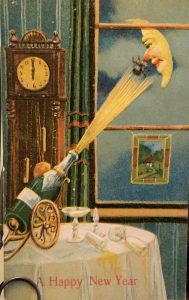 Many cards in my New Year’s collection were sent or received locally. The champagne cork bopping the moon in his red nose card was sent to Floyd Jones in Weissport from a friend in Philadelphia.  It was postmarked there at 11PM on Dec. 30, 1907 and again in Weissport at 8 the next morning. 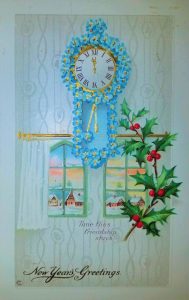 The forget-me-not framed clock was sent on Dec. 30, 1912 to Mrs. Ralph Metz on a farm near Nazareth by her mother in Nazareth.  It may not have gotten to her on the same day, but certainly in time to greet the New Year. Another left Easton on New Year’s Eve, 1907 and was postmarked 250 miles away in tiny Westover, Clearfield County at 11 on New Year’s morning.

Almost as fast as an e-card today—and for only 2 cents.