The “Switzerland of America” – Ephemera from the Switchback Railway

The “Switzerland of America” – Ephemera from the Switchback Railroad

One hundred years ago, a popular tourist attraction was the “Switchback Railroad,” located in the “Switzerland of America,” at Mauch Chunk, PA (present day Jim Thorpe.)  In the museum world, “ephemera” is a term used to describe objects that were never meant to survive, or be considered as collectibles – items like ticket stubs, time tables, and brochures.  But, thanks to the nature of people to hold onto happy memories, items like these often find their way into scrapbooks and treasure boxes, providing an incredible glimpse into the past!  Today, we’re traveling back 100 years by looking at some of the “ephemera” from the 1921 season on the Switchback Railroad. 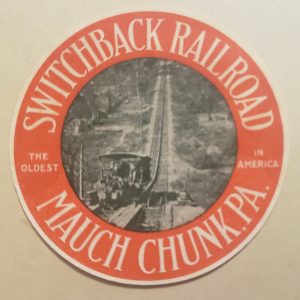 A small paper token, about 2″ across, boasts that the Switchback Railroad is “the oldest in America.”

Originally designed to move coal from the Summit Hill mines to the Lehigh River at Mauch Chunk (present day Jim Thorpe), the Switchback Railroad was an engineering marvel.  When Josiah White and Erskine Hazard founded the Lehigh Coal and Navigation Company in 1818, one of their first major accomplishments was the opening of the “Old Mine” on Summit Hill in 1819, along with a nine-mile stretch of road which was the “first road in America to be laid out by an engineer’s level,” according to a historical brochure about the Switchback.  By 1825, the amount of coal being produced by the Summit Hill mines overwhelmed the carrying capacity of the road, and a gravity-incline railroad was built over the nine-mile incline, descending over 100 feet per mile.

Widely believed to be the first commercial railroad in America, the gravity-powered railroad opened in 1827, carrying coal and mules down a 936 drop in elevation.  Once offloaded at the Lehigh River, the mules hauled the empty cars back to the top to be re-loaded.  The railroad continued to grow, eventually boasting over 12 miles of track, including the nine-mile long trek from Summit Hill to Mauch Chunk, and an additional four miles of track branching into the coal mines. 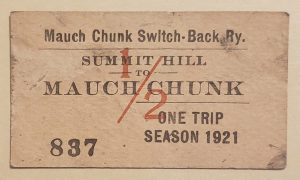 A ticket from the 1921 season for one trip on the Switchback Railroad.

By 1870, the railroad was no longer the main means of transporting coal, but it had become a popular tourist destination.  Mauch Chunk had developed a reputation as the “Switzerland of America,” with picturesque settings ideal for tourists escaping from dirty, crowded cities on the East Coast.  Once you arrived at the Switchback Depot, you were hoisted up to a height of 1500 feet above sea level via the inclined plane at Mt. Pisgah, and then “dropped” to ride the entire length back to the bottom – just like a modern roller coaster!  The brochure carefully notes that “Safety is assured through a device, so arranged, that should anything go wrong, the car is automatically caught and held.”

A train pass for the Switchback Railway, dated 1921 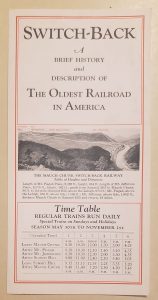 The first stop was “High Point,”  at the top of Mt Pisgah.  A three-minute pause allowed visitors to admire the Blue Ridge Mountains and the Lehigh River as it snaked its way out the Lehigh Gap.  On a clear day, you could see over sixty-five miles, all the way to Schooley’s Mountain in New Jersey.  Passengers then rode six miles down the mountain, traveling through “cool, refreshing forests” to visit White Bear at the foot of Mt. Jefferson plane, where the train was again hoisted up over 1,600 feet to the top of Summit Hill.  Visitors could then explore the surface mining operations of Lehigh Coal & Navigation, and visit the famous “burning mines,” which caught on fire in 1859 and resisted all attempts to extinguish the underground coal fire.

An excerpt from an informational brochure, below, describes the picturesque journey passengers could expect to enjoy. 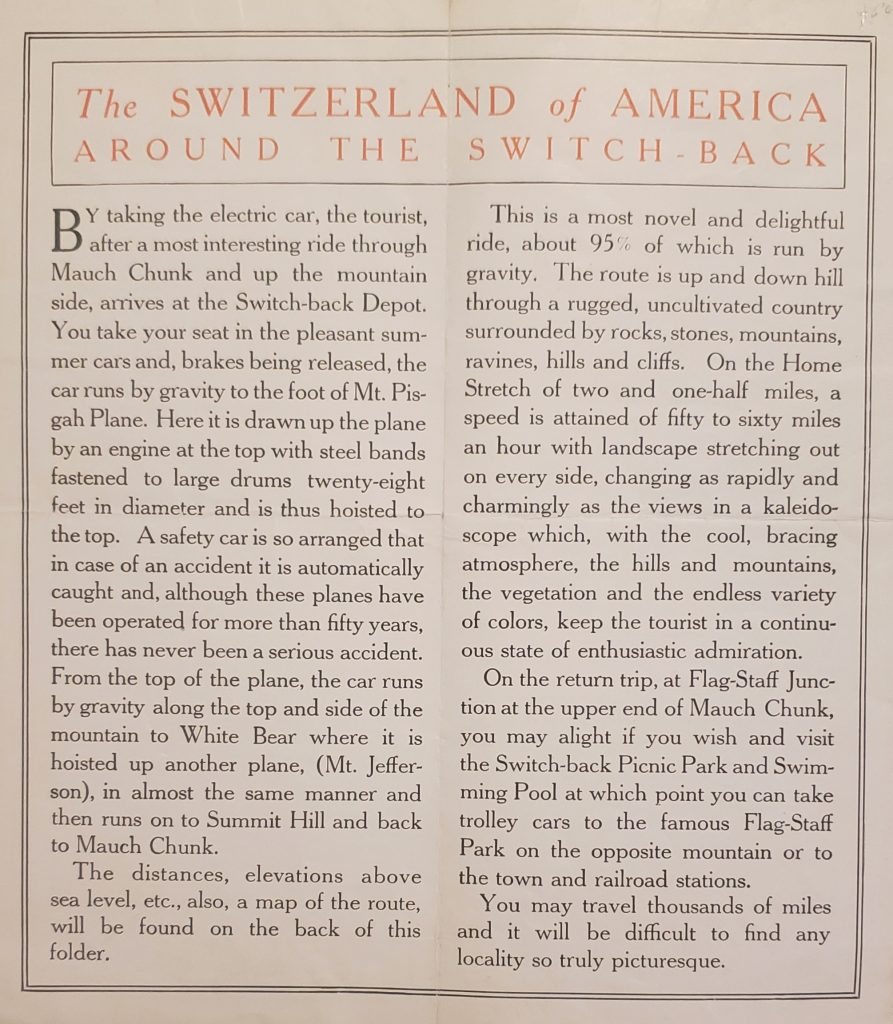 This time-table shows how frequently trains ran to keep up with tourist demand: six times per day, with each excursion lasting just under 90 minutes.  Trolley Cars departed from the Carbon County Courthouse in Mauch Chunk to connect tourists with the Switchback Railroad. 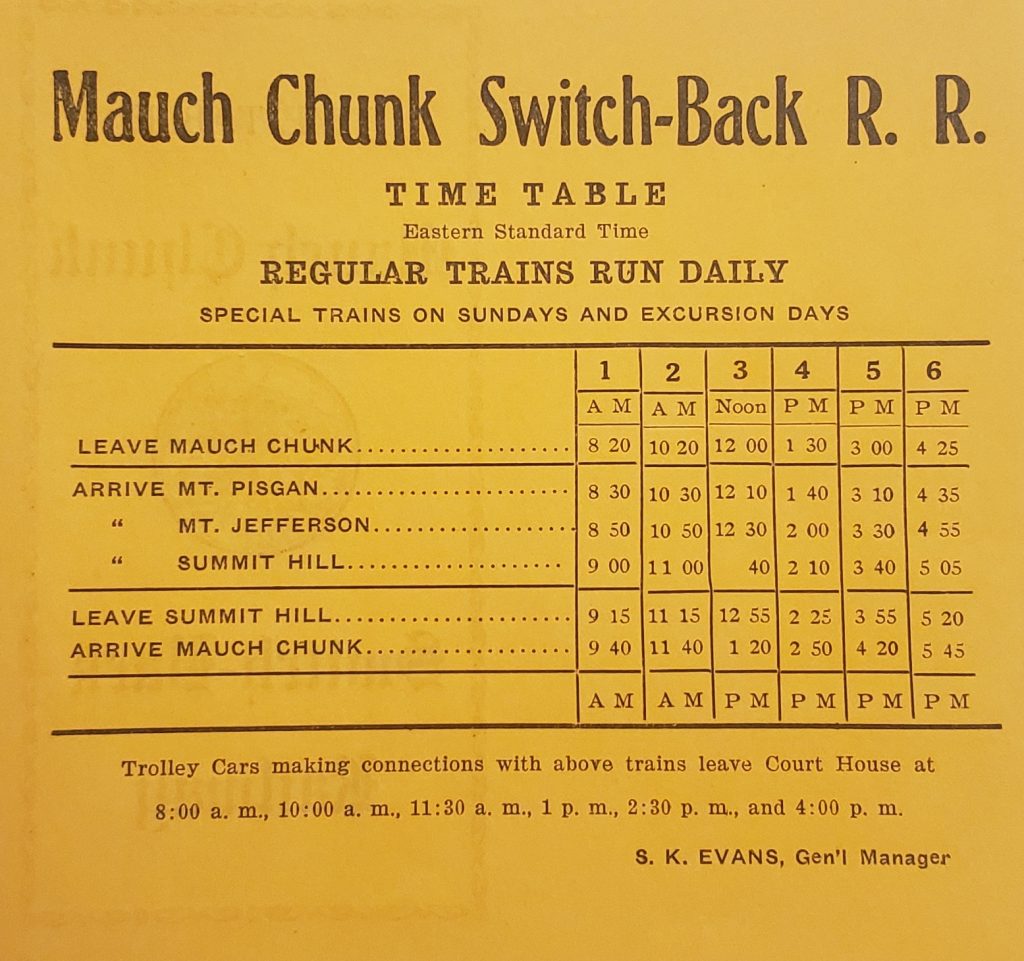