“The Handsomest Train in the World”

“The Handsomest Train in the World” 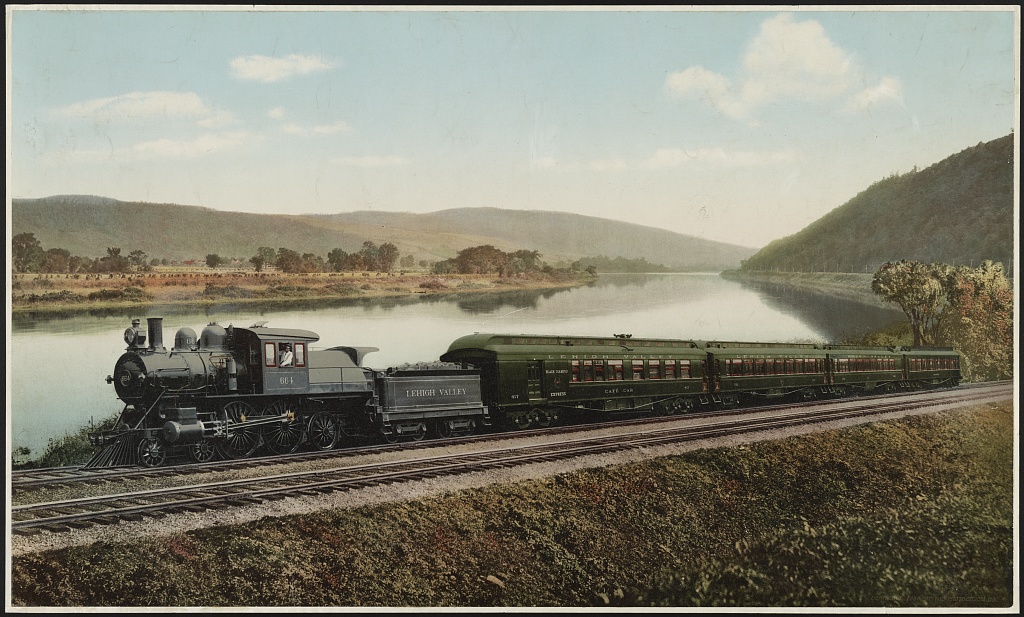 The Lehigh Valley Railroad “Black Diamond Express,” around 1898. Courtesy of the Library of Congress.

For over twenty years, the canals built by the Lehigh Coal & Navigation Company were the predominant way to move the region’s valuable anthracite coal from the mines to the markets – but the engineering marvel of the canals was eventually overtaken by the railroad.  In 1846, the Delaware, Lehigh, Schuylkill & Susquehanna Railroad was incorporated to construct a railroad from Mauch Chunk (now Jim Thorpe) to Easton, PA, running parallel to the Lehigh River and breaking the LC&N monopoly on coal transport.   The railroad had a slow start until 1851, when businessman and future founder of Lehigh University, Asa Packer, took over the company. By 1855, with Robert H. Sayre serving as chief engineer, the name had been simplified to the Lehigh Valley Railroad, and the line opened for business on June 11, 1855. 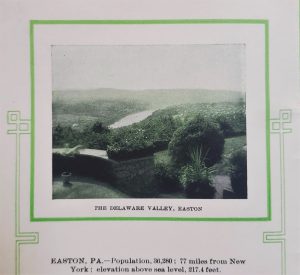 Detail from “As Seen From the Train,” picturing the Delaware Valley at Easton. Click to Enlarge.

The railroad continued to expand, and served as an important passenger line as well as the primary means for shipping coal and other goods.  By 1896, the railroad stretched from Jersey City, NJ to Buffalo, NY, following the Lehigh and Susquehanna Rivers, and passing through the scenic finger lakes.  The overwhelming beauty of the area made the route popular with wealthy passengers traveling from New York City, which connected to the train via ferry, to the Finger Lakes region and Niagara Falls.  On May 18, 1896, the Lehigh Valley Railroad put the “Black Diamond Express” into service: a luxury passenger train named for the valuable anthracite coal.  The Black Diamond ran from New York City to Buffalo, and was soon dubbed “The Handsomest Train in the World” and the “Honeymoon Express.”

A glimpse into the level of luxury available to passengers on the Black Diamond emerged from the collections here at the National Canal Museum:  Pictured here is a full-color, gilded inner label from a cigar box, boasting “America’s Cleanest Smoke” – no doubt a play on words referencing not only the quality of the cigar tobacco, but the clean-burning anthracite coal of the region.  Gentlemen onboard the train would be offered brandy alongside the railroad’s privately-branded cigars, while ladies might be invited to browse the train’s available reading material, or relax in the observation car to enjoy the passing scenery. 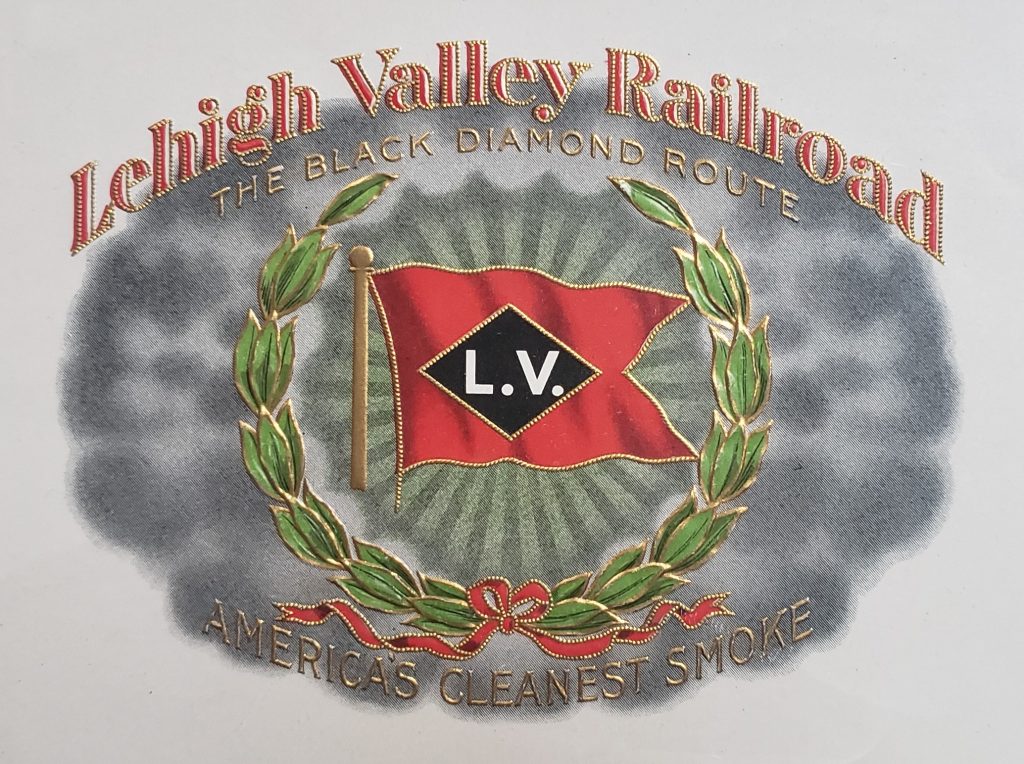 Also in our collection is this lovely tour brochure offered by the railroad, entitled “Lehigh Valley Railroad: As Seen From the Train.”  Dating from 1912, the booklet notes that “There are moments when, not withstanding the beauty of the scenery without and the luxurious appointments within, traveling becomes somewhat monotonous.  Under such conditions, it should be a relief to have at command, an itinerary briefly descriptive of the places passed.”

The booklet offers a photo of each major point along the way, along with statistics and a brief history or description of each town or point of interest the train passes, in order from New York City all the way to Buffalo.  Of Easton, for example, the passenger is informed that “Having crossed the Delaware, the traveler enters Pennsylvania at Easton, the “City of Resources.”  This town was founded in 1737, and named by Penn in honor of his father-in-law, Lord Pomfret, whose country seat in Northamptonshire, England, had that name.”

It goes on to note that “The industrial plants turn out pianos, organs, railway and general supplies, rock drills, cement, stoves, paints, cordage, lumber, oils, chemicals, tools, bricks, belting, and facings.  There are also silk, knitting and flour mills, foundry and machine works, brass and marble works, underwar, and carriage factories,” painting an incredible picture of the importance of Easton as a commercial and manufacturing center around the turn of the 20th century.

Below, this map included in the booklet shows the overall route of the Black Diamond, with the various towns described.  It also gives an idea of the scope of the Lehigh Valley Railroad’s many “feeder lines” which connected scattered industries to the main shipping route.  (Click to enlarge and explore!) 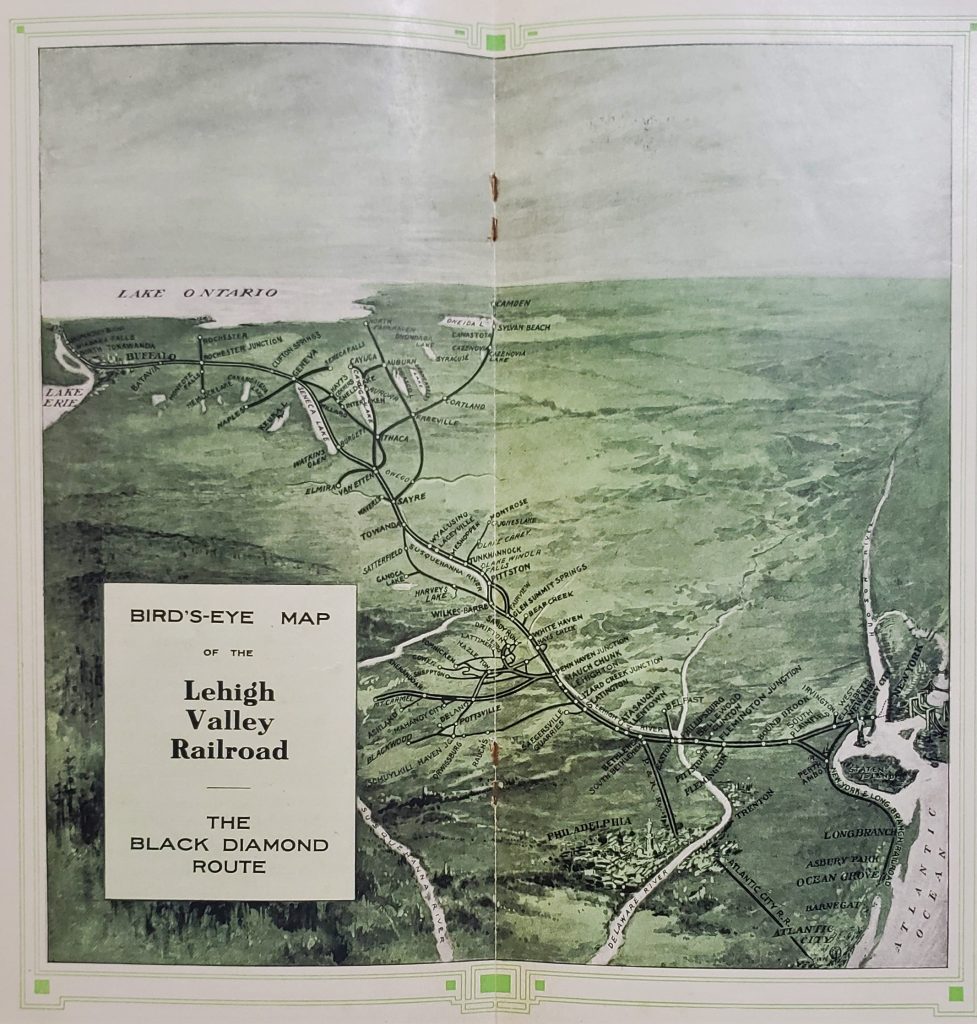