Conch Shell Horns on the Canal – and way, way back in history.

Conch Shell Horns on the Canal – and way, way back in history.

The deep, loud hoot of a conch shell horn has been sounded for centuries in island and maritime cultures around the world.  Around here in the 19th and early 20th centuries, people who lived along the Lehigh, Delaware, Morris, Delaware and Raritan, and Schuylkill Canals heard it thousands of times. A blast on a conch shell, which can be audible a quarter mile away, was the way most boat captains gave the required signal to locktenders as they approached the canal locks.  Not doing it could cost a captain a $2 fine—serious money back then.

Conch shells were more than just necessary equipment on the canal boats.  In the earliest days of canal navigation, having one conferred status, too. It meant that a canaller had travelled to the ultimate destination of his route—a seaport city such as Philadelphia or New York.  There, he could meet sailors who had been in tropical waters, caught (or bought) and ate the soft-bodied inhabitant of the shell, and brought it to back home. Then, with the pointed tip of the shell cut off and a little blowing practice, the boatman had a loud, useful, rust-and-water-proof horn. 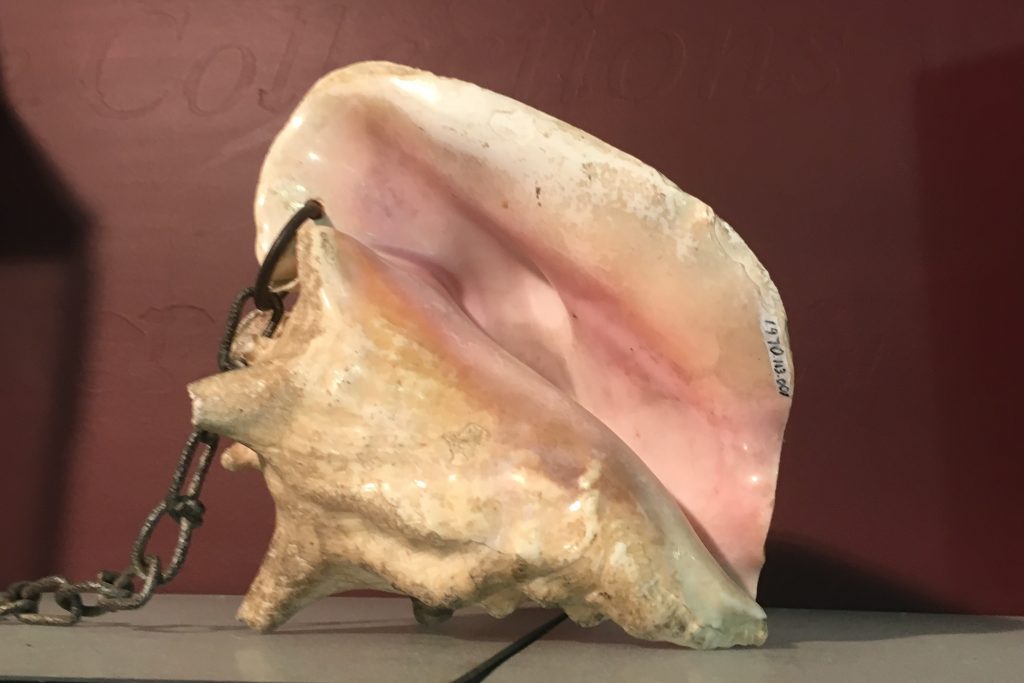 This Conch-Shell Horn on display at the National Canal Museum was donated by one the last boat captains on the canal, Erwin Grant Emery.

Too precious to risk being lost overboard or broken, a conch horn like this one in the photograph often had a chain or hook attached so it could be hung close to the tiller, or even worn around the captain’s neck.

In the waning decades of navigation on the Lehigh and Delaware Canals, most of the remaining boatmen were descendants of generations of canallers.  Many conch horns were passed down through families, such as Uhlertown’s Emery family.  The conch horn in the photograph was donated by one of the last boat captains, Erwin Grant Emery, to the Canal Museum and the Pennsylvania Canal Society in 1970.

We still blow a conch horn aboard Josiah White II when our canal boat ride nears the turn at Guard Lock 8. It’s one of the ways the National Canal Museum evokes the two centuries-old history of the canals for our visitors.  But recently, a French museum announced that it had not only rediscovered an 18,000-year-old giant conch shell in its collection, but finally correctly identified it as a prehistoric musical instrument.

The conch, found in a prehistoric cave in 1931, had the tip cut off and holes drilled in it, one of which may have been for an added mouthpiece.  A professional horn player sounded three notes on the ancient conch, but the museum’s researchers think it may be capable of more tones.  Learn more, and listen to the same sound our prehistoric ancestors heard here: https://www.smithsonianmag.com/history/hear-what-18000-year-old-giant-conch-instrument-sounds-180976977/

To hear a conch sound across the waters of the Lehigh Canal, visit the National Canal Museum and take a ride on the Josiah White II this season.  Visit www.canals.org to find out when the boat rides will begin.