Lucky to Have the Irish

Lucky to Have the Irish 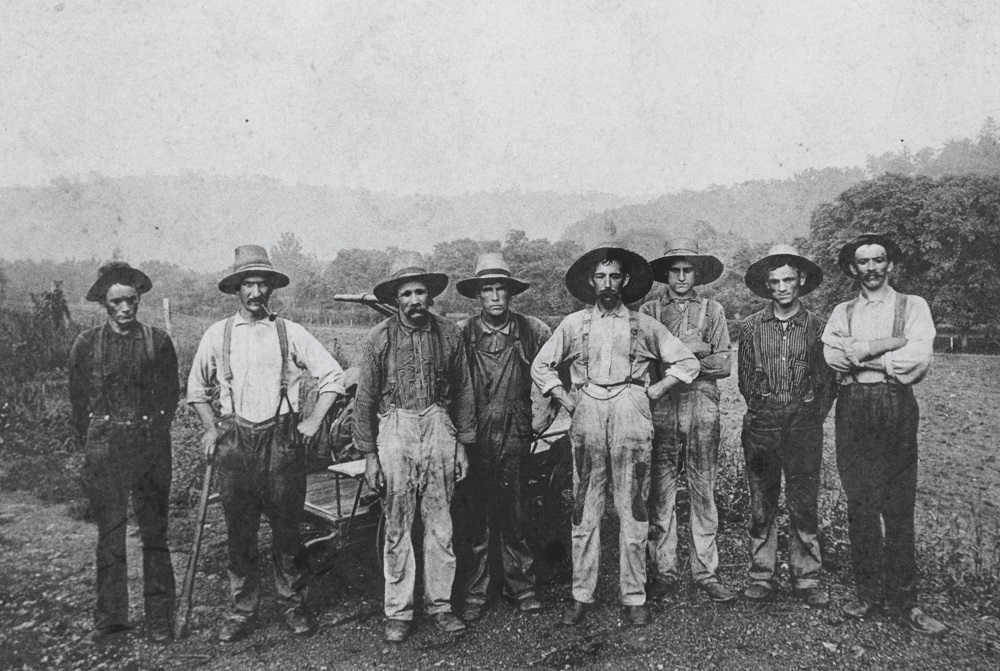 Irish laborers in the Weissport area, believed to be working on either the Lehigh Valley or the Lehigh & Susquehanna Railroad. A hand car is visible behind them.

During the 1820s and 30s, when canal-building was booming, it was said that all you needed to build a canal was a pick, a shovel, a wheelbarrow, and an Irishman. Between 1815 and 1834, over 400,000 Irishmen, mostly young and unmarried, arrived to do just that.

Canals were the first major construction projects in the US, and the first that needed pick-and-shovel workers.  Native-born Americans were not eager to take back-breaking jobs in remote areas, even for the high pay of a dollar a day, Desperate young Irish men—made jobless by the collapse of the Irish textile and iron industries that flourished during Britain’s decades of war with Napoleon and forbidden to own land—would.  First, they flocked to upstate New York to dig the Erie Canal. Then a thousand Irish who had survived that dangerous years-long project came to Pennsylvania with canal engineer Canvass White, and with help from local German farmers, built the Lehigh Navigation. They finished the 46-mile route that carried anthracite coal from the mines to market in less than thirty months, and under budget.  Irish workers were instrumental in building all the anthracite canals, and later the railroads that ultimately replaced them.

The Irish famine years of the 1840s triggered another wave of immigration, but this time it included women. Of the 1.5 million Irish who came to the U.S. between 1845 and 1856, more than half were females. In 1850, Irish immigrants made up more than half of the foreign-born residents of Pennsylvania.  This massive wave of Catholics lowered the percentage of the US population that was Protestant from 97% to just under 90% in only a decade, and triggered a wave of anti-Catholic and anti- Irish bigotry that was sometimes violent and gave birth in the 1850s to the short-lived nativist political party that was nicknamed the Know-Nothings. For devout Irish Catholics this meant the pool of marriageable mates was limited to other Irish Catholics, a situation that prolonged the traditional links of clan, kinship, and regional ties for one or two more generations.

Irish immigration leveled off after the Civil War, and later immigrants faced less hostility as other, newer, ethnic groups started to arrive. This was partly because thousands of young Irish men had served in the Union Army, which sped up assimilation and acceptance. The Irish also quickly adopted the English language, but most remained among the ranks of unskilled labor, in mines, factories, and domestic work until the last quarter of the 19th century.  By the 1880s, Irish neighborhoods in Eastern and Mid-Western cities had grown substantially, which led to economic and political clout. Both public and Catholic schools had been widely established; education and the assimilation that came from it allowed the descendants of the original Irish immigrants to gain upward mobility in the rapidly industrializing United States.

The Washington Post reported in 2013 that the 2010 US Census showed there are 34.5 million Americans who list their heritage as either primarily or partially Irish. That is seven times the population of the Republic of Eire itself, which is 4.68 million. Irish is the second-most common ancestry among Americans, just behind German. Ten percent of us who live here in eastern Pennsylvania have Irish ancestors.   More interesting Irish-America demographic data here: https://www.washingtonpost.com/news/wonk/wp/2013/03/17/the-irish-american-population-is-seven-times-larger-than-ireland/