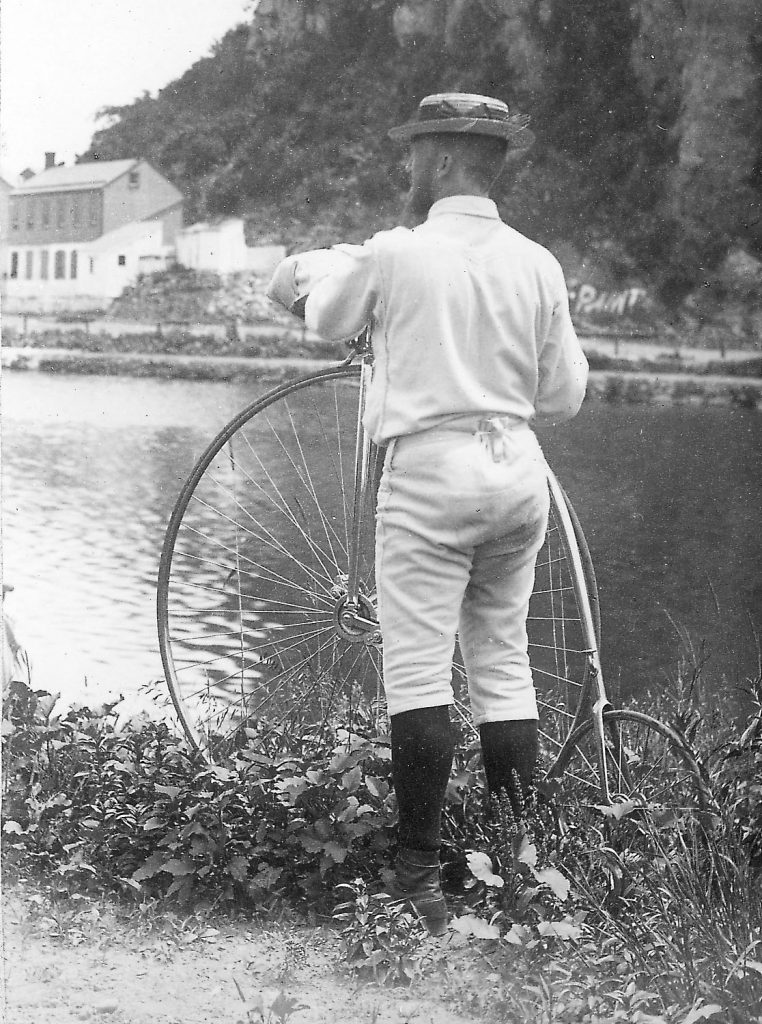 Is this the first person to bike the D&L Trail?

We can’t say for sure, but this photo of Lyman H. Bagg, with his high-wheel bicycle on the north bank of the Lehigh in Easton was taken on June 21, 1886.

The photo was taken during the “Perilous and Thrilling Adventures of the Good Ship Molly-Polly Chunker” the log of a canal scow converted into a luxurious houseboat for a boating vacation for a group of wealthy (mostly) New Yorkers.  Among them was Louis Comfort Tiffany, who came up with the idea for a two-week excursion on the Delaware and Lehigh Canals with his friends to celebrate his engagement to Louise Knox, daughter of the president of Lafayette College.

Everyone on board the Molly-Polly Chunker (named for the mules who pulled it, while Lehigh Canal boats were dubbed “chunkers” because they started their trips in Mauch Chunk) got a nick-name.  Tiffany was “the Artist” while Louise, though an adult of 37 was the “Charge” of an older woman chaperone. When Bagg turned up near the northern end of the Delaware Canal, he became “The Wheelman.”

“About 5 o’clock…the great Wheelman circled (sic) up to the boat, dismounted and stepped on board. He was handsomely dressed in shirt and knee breeches of white flannel, and black stockings, a style of costume utterly beyond the appreciation of the canalmen…”

The Wheelman was a fanatic cycling enthusiast who wrote extensively about his travels on his “penny-farthing” bike.  His publisher, Henry Holt, (the Scribe) was a member of the group, so it’s not a surprise that they gave him lodging aboard the boat on the night of June 20.  The next morning “The Wheelman made his last farewells, and promised to wave adieu as he should cross the bridge…”

His stately progress was interrupted, however, by two mules coming up the towpath.  Probably never having seen a bicycle before, “the forward mule trembled in terror, turned completely around, took the other mule off his legs with the towrope, and they both turned somersaults and rolled about in a confused mass.  The Wheelman hastily dismounted but… his apologies to the mule drivers were not accepted graciously and he wheeled off without looking back at the scene of the disaster.”

This mule-ish encounter may be why Bagg was across the river from the Lehigh Canal and its towpath when this photo was taken. For whatever reason, Bagg headed back to his home in New York, noting in his 1890 self-written “Obituary” that the next day he “barely escaped being maimed or killed by a carelessly-driven horse” that came up behind him in Somerville, New Jersey.   (He actually died in 1911.)

There’s one part of the D&L Trail where mules still have the right of way over bicycles:  the Hugh Moore Park Spur.  When our mules George and Hank are working pulling the Josiah White II, please make sure to observe the signs the prohibit bikes on the towpath and stick to the paved road along the river.

Interest in the two-wheeled machines exploded, and by the 1890s, Europe and the United States were in the midst of a bike craze. A New York Times article from 1896 gushed that “the bicycle promises a splendid extension of personal power and freedom, scarcely inferior to what wings would give.”

Easton to Host Tour of Somerville