Cooking on the Canals

Cooking on the Canals

Outdoor grilling season is upon us, and May is National Barbecue Month.  But did you know that back in the 19th and early 20th centuries, canallers were the cook-out champions?

For most of the April to November boating season on the Lehigh, Morris, and Delaware Canals, the little iron cookstove stood on the deck of the canal boat. The “Boatman’s Friend” as they were always known no matter the manufacturer, stood on four legs, and had a short chimney.  All the cooking was done on the two or three plates on the top of the fire box where an anthracite fire was kept continuously going. 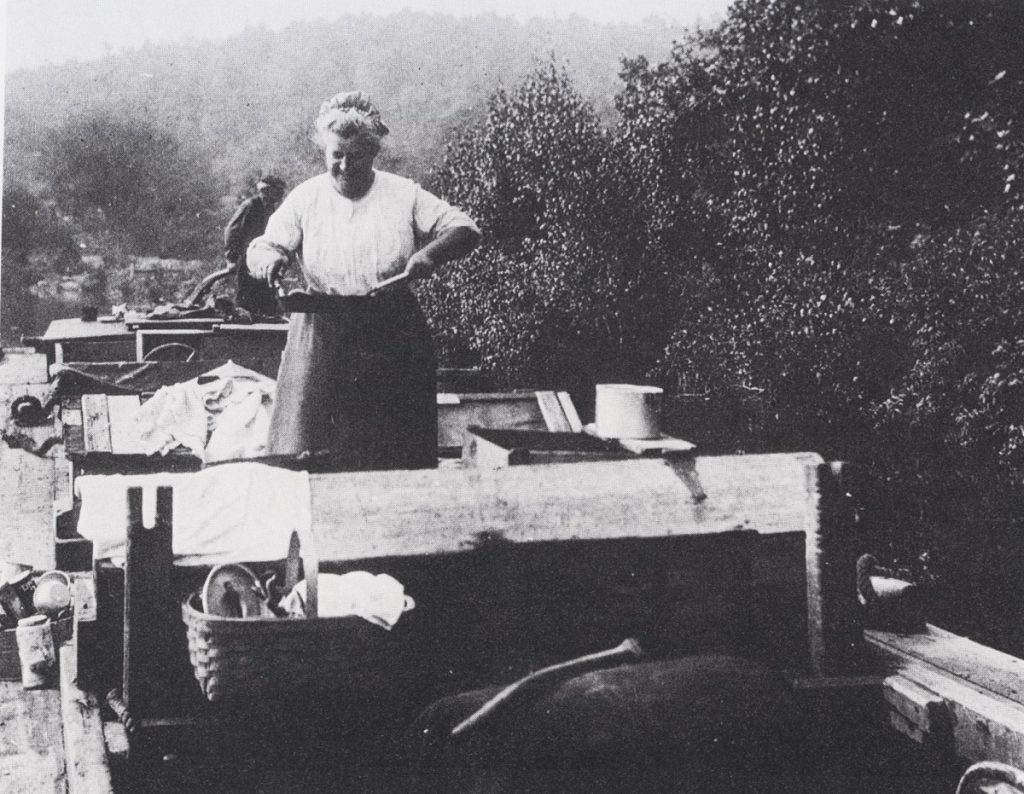 A woman cooking atop a canal boat

So the only things a canal boat mother or boatman could cook had to be made in a pot, frying pan or griddle on top of the stove.  Oral histories that were recorded with former canallers on our canals give us a taste of what was cooked on board.

The Best sisters of Walnutport, who spent much of their childhood summers aboard their father’s canalboat recalled their mother making sauerkraut, French toast, and mashed potatoes on their boat stove, and frying fish their father bought from sportsmen along the river. Beans were a staple, especially “baked” in a Dutch oven on the stove, which was also used to “bake” potatoes.. Bacon, ham, and smoked sausage were the usual fare, though Isabel Lenstrohm Mann told Jim Lee Sr. that salt mackerel was standard breakfast fare on the Morris Canal. She also described how to make “pork float” a stew of salt pork with potatoes, onions, tomatoes, parsley and marjoram for seasoning. 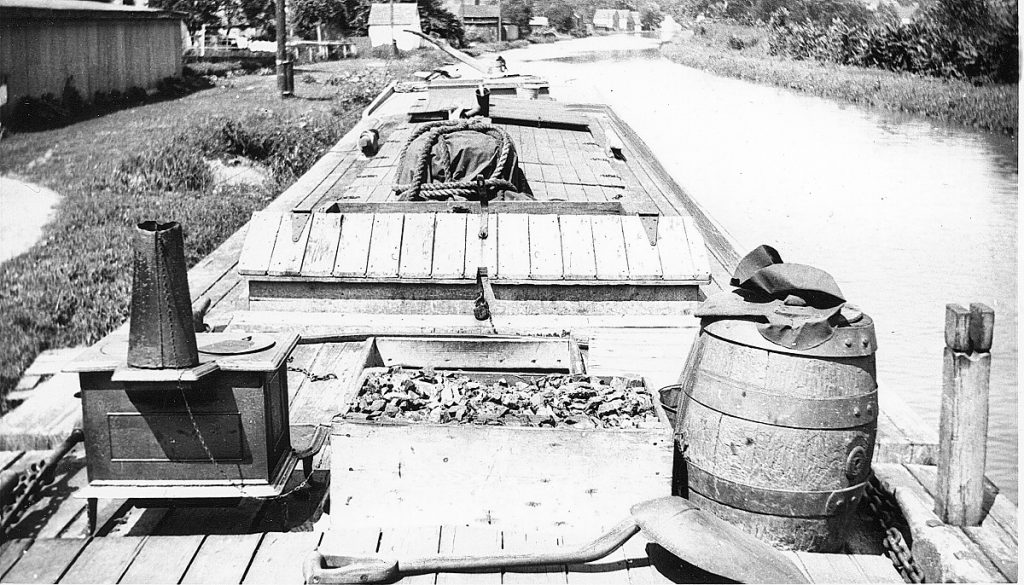 The photo above shows the “kitchen” of a Lehigh Canal Boat. The stove and water barrel were on the front edge of the hinge, and the feed box, which not only held the mules’ food but was often used to store things like smoked meats, was at the back edge of the hinge. This photo is looking towards the stern. Note the chain on the stove chimney. If was boat was “light” (empty) it would just clear the underside of the bridges on the Delaware Canal. The chimney could be taken off the stove, and laid along side, and if it was knocked off, it could be easily retrieved if it fell overboard.

With no real ovens on the boats, canallers bought bread, sweets, and pies from locktenders’ wives or stores along the route. This was how they also added eggs, fruit and fresh vegetables to their meals, though those things usually had to be eaten quickly.  Many canallers stored their supplies under the mule fodder in the feed box, but with no refrigeration to prevent spoiling in the summer heat, food could be kept cool in a locker in the cabin that was always below the waterline of the boat. And in cold or rainy weather, the stove was carried down to the tiny cabin in the stern for heat and cooking.

Eat like a canaller! You can learn how to make Pork Float and some other dishes that they ate on the boats on our website at https://canals.org/national-canal-museum-at-home/museum-at-home-kids-on-the-canal/#cooking