Laury’s – The Little Island That Could

Laury’s – The Little Island that Could

Just like we do now, folks who lived in the Lehigh Valley saw Decoration Day—the original name for Memorial Day—as the holiday that signals the start of summer.  Even in the 1890s, with the Civil War still a fresh memory, May 30 was as much an occasion for picnics and excursions as it was about honoring the memory of fallen soldiers. 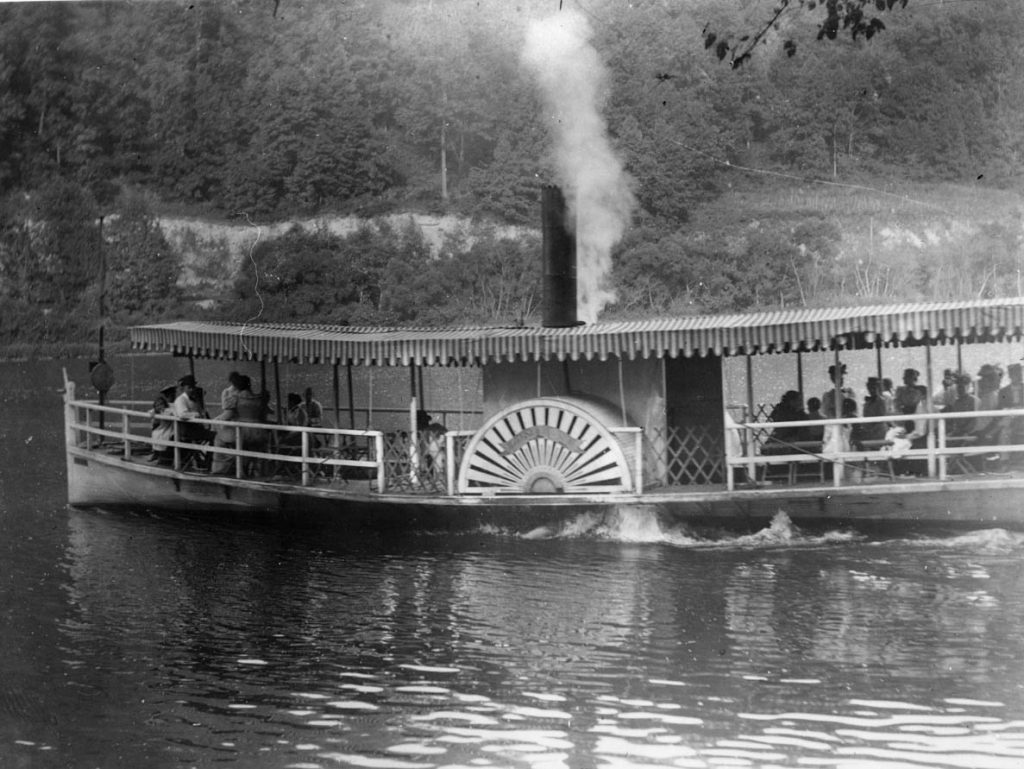 A paddlewheeler on the Lehigh! The Trilby ferried day-trippers from Catasuqua to Laury’s Island from 1895 to 1899.

In those days, holiday makers could choose from several destinations like Dorney Park, Rittersville Park, Calypso Island in Bethlehem, Island Park near Glendon, or one of the many picnic groves that city churches built for summer worship and recreation for their congregations. Beginning in 1891, they could also take the Lehigh Valley Railroad to the rail line’s own small but lovely park, Laury’s Island.

The island got its name from the Laury family, whose patriarch David Laury built a hotel and store in the 1830s in the tiny settlement then known as Slate Dam.  (The Lehigh Coal and Navigation’s adjacent dam No. 5, was so named because of the slate bottom in the Lehigh River there.) In 1890, his son Alexander bought a small strip of land in the river, only yards from the bank where the hotel stood, from the Lehigh Coal & Navigation Company.  He may have intended it to be an extra amenity for the hotel’s guests, but he sold it only months later to the Lehigh Valley Railroad.

The railroad apparently saw great potential for profit and advertised the island park as a site for Sunday School outings, family reunions, and social club gatherings.  The railroad touted its beautiful and tranquil surroundings, a watchful staff that quickly quelled troublemakers, and strict prohibition of alcohol (though that could easily be evaded by a visit to the nearby hotel.)

The island’s dry status turned out to be an attraction rather than a hindrance, as the first large excursion group nearly every year of the park’s existence was the Young Men’s Temperance Society; many church picnic committees also favored a no-alcohol atmosphere.   Amusement rides, including a toboggan slide, a small merry-go-round, and a miniature steam train were added, as was a band shell where the Allentown Band played several times a season.

Even though the railroad carried most of the patrons to the park, it allowed the owner of the Laury Toboggan Slide Company to purchase a small steamboat that had ferried people from Allentown to what is now called Adams Island.  Originally called the Lotta, the boat was refurbished and dry docked in Catasauqua over the winter of 1894, and for four years, park-goers could board the now renamed Trilby there and cruise up the Lehigh to Laury’s Island.

But the Park’s days were numbered. A devastating flood in late February, 1902 completely submerged the island.  It was repaired enough to open on Memorial Day, but another flood swept over the following year.  This time there was adequate warning, so the miniature train could be taken to higher ground, and rebuilt for the opening of the 1903 season. In an attempt to lure the Decoration Day crowds back, the park built an enclosed theater and showed Edison moving pictures during the breaks between the dances.

But the number of visitors dwindled, the Allentown Band switched to playing at Dorney Park, and in March of 1906, the Lehigh Valley Railroad announced that the park would not reopen. No specific reason was given, but the company hinted that it would widen its right-of-way and add tracks, as it had done to Calypso Island. And the memory of Laury’s Island faded away.

But not long ago, a single line in the Wikipedia page about Laury’s Station that mentioned the park caught the eye of freelance writer and blogger Laura Klotz. Intrigued, she took up an exhaustive newspaper search and combed the records of St. John’s UCC church in Laury’s for information about the Laury family, the island and the park.  The result is a fascinating and well-written 86 page book called Laury’s Island: the Lehigh Valley’s Forgotten Park that is available through Amazon and Barnes & Noble online.