From Mahoning Township to the Moon

From Mahoning Township to the Moon

As recently as the early 1950s, one-or two-room elementary school houses for first to eighth graders still dotted the more remote rural areas of our region.  One such place was Mahoning Township, where those schools produced at least two notable alumni: writer and historian Joan Campion, and chemical engineer Lee S. Gaumer. 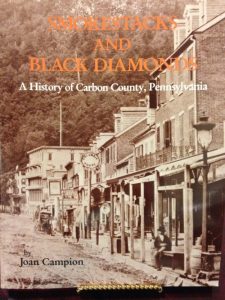 Smokestacks and Black Diamonds is available for sale through the National Canal Museum online store.

Joan Campion (1941-2012) wrote several accounts of her childhood in the Mahoning Valley. In the history she compiled of Carbon County, Smokestacks and Black Diamonds, (Canal History and Technology Press, 1997) she recounts a conversation with her sixth through eighth grade teacher, Arline Haupt. Miss Haupt spent much of her forty-year career in education teaching multiple grades at the same time. Having students in different grades in close proximity had more benefits than drawbacks, she told Campion. “The younger children picked up part of the material for the advanced classes just by overhearing it while they were studying other things, and the older children helped the younger ones,” she said.

The system—or at least this particular teacher–must have had some merits. One of Miss Haupt’s students was Lee Gaumer; she taught him for all eight years of elementary school.  He went onto become…the nation’s acknowledged leading expert on rocket fuel. 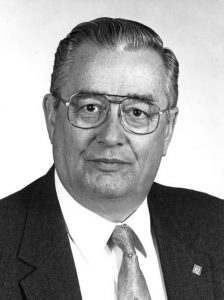 Lee Gaumer, courtesy of the National Academy of Engineering

Lee Strohl Gaumer, Jr. (1926-2010) was raised on a farm in the Mahoning Valley between Lehighton and Tamaqua. He graduated from Penn State in 1948; by the end of that year, he was part of a US Army group that dismantled Enrico Fermi’s Manhattan Project nuclear reactor constructed under the grandstand of the University of Chicago’s stadium. While in the Army he also worked at the White Sands Rocket Proving Grounds in New Mexico.

Gaumer joined Air Products and Chemicals, Inc. in 1952. There he developed the firm’s break-through technology for large-scale conversions of gases such as natural gas, oxygen, and hydrogen into liquids. Today, liquified gases are used in industries such as pharmaceuticals, electronics, metallurgy, and food processing, and liquified natural gas is carried on ships around the world. But in those early days of the Space Race the chief focus was liquefaction of hydrogen to become lightweight, energy-packed fuel for rockets. It was rocket science and Gaumer and his Air Products team succeeded: their fuel carried NASA’s Apollo spacecraft to the moon and powered the space shuttles.

At a National Association of Manufacturers meeting in 1991, Gaumer received the Adolf Coors Inc. American Ingenuity Award, one of many such honors that he always made a point of sharing with his Air Products colleagues. To promote the education of more scientists like himself, he donated the $15,000 scholarship that came with the award to Penn State.  After the event, he told a Morning Call reporter that he had watched the first Apollo moon landing in 1969 at his parents’ farm where he had grown up thirty-five years earlier, without electricity or a telephone, and learned math in a one-room school house.