Revolutionary and Inspiration for a College – The Marquis de Lafayette

Revolutionary and Inspiration for a College – The Marquis de Lafayette 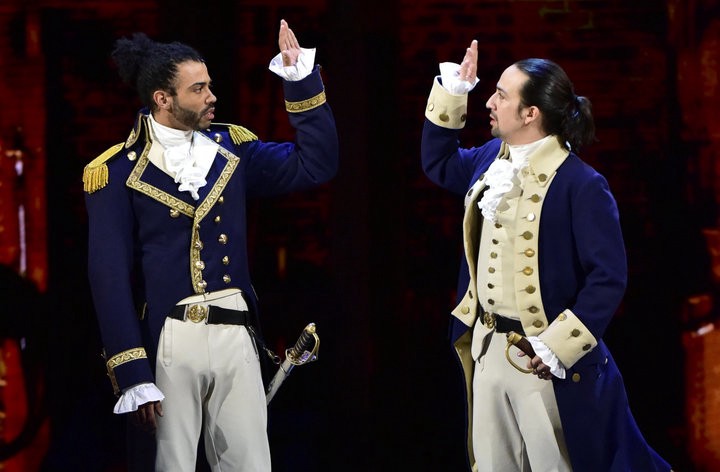 Daveed Diggs as the Marquis de Lafayette and Lin-Manuel Miranda as Alexander Hamilton, from the 2016 Broadway hit “Hamilton”

Oui oui, mon ami, je m’appelle Lafayette – The 2016 Broadway hit Hamilton may have launched the quick-thinking and even quicker-tongued portrayal of the Marquis de Lafayette into the modern American consciousness, but tributes to the French military hero of the American Revolutionary War are much, much older.  Here in the heart of the D&L Corridor, Easton’s Lafayette College is one such tribute, “a College built from the hopes and dreams of a young nation by inspired citizens who named it for a Revolutionary War hero.” 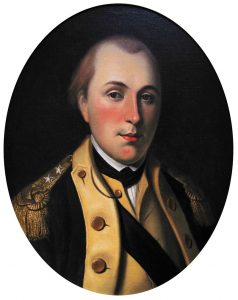 The Marquis de Lafayette in Continental Uniform, painted by Charles Wilson Peale around 1779.

That “Revolutionary War hero” was born Marie-Joseph Paul Yves Roch Gilbert du Motier, the Marquis de LaFayette, and known simply as Lafayette by the newly-formed Continental Army.  Born into a wealthy military family in the south of France on September 6, 1757, he entered the French Royal Army as a teenager, and soon became sympathetic to the growing struggle between the American Colonies and Great Britain.  Upon traveling to America, he was commissioned as a major-general in the new Continental army at age 19.  Although the title was largely honorary due to his wealth and status, his tactical brilliance and command of troops shone on the battlefield, and his skilled negotiations with France for financial support were a critical component in the eventual American victory against Great Britain.

Lafayette’s revolutionary zeal did not end with the American Revolution, however, and he soon returned to France.  As an active member of the French government, he helped form the National Constituent Assembly in the early days of the French Revolution of 1789, and with the help of Thomas Jefferson, wrote the Declaration of the Rights of Man and of the Citizen.  After the storming of the Bastille on July 14, 1789, Lafayette assumed command of France’s National Guard.  He refused to participate in Napoleon’s government, but remained active in French politics after the Bourbon restoration in 1814, and even refused an offer to become the French dictator following the July Revolution of 1830.  Lafayette also remained friendly to the new United States of America, and it was on an 1824 tour of America as the guest of President James Monroe that the inspiration for Lafayette College was born. 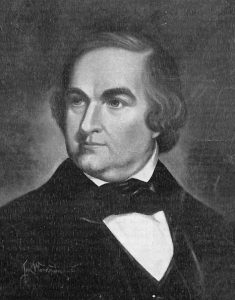 In 1818, lawyer and War of 1812 veteran James Madison Porter moved to Easton, and was appointed attorney-general of Northampton County in 1824.  Porter joined a contingent of 200 representatives from the Easton area who made the journey to Philadelphia in September, 1824, to meet the aging general Lafayette.  In their conversations, Porter discovered that Lafayette vividly remembered Porter’s father and uncle from the Battle of Brandywine in 1777, where he had been wounded. With this connection to the past in his mind, Porter soon after visited the Military Academy at Norwich, Vermont and Dartmouth College in Hanover, New Hampshire.

Inspired by the legacies of these institutions, and that of Lafayette himself, Porter resolved to forge a similar educational legacy in Easton.  The city historically struggled with establishing higher education, and there was strong support for the planning of a new college.  On December 24, 1824, local newspapers announced:

“The citizens of the County of Northampton, friendly to the establishment of a college at Easton, in which, besides military science and tactics, the various other branches of education, including the German language, shall be taught, are requested to meet at the Easton Hotel on Monday evening 27th inst. at half past six o’clock to adopt the necessary measures to procure a charter of incorporation.”

While it’s unclear exactly who proposed that the new college be named “La Fayette,” it is likely that it was Porter himself, and almost certainly one of the 200 citizens who had traveled to Philadelphia only a few months before.  On March 9, 1826, Governor John Andrew Shulze signed the college’s charter, formalizing the college that would hold Lafayette’s name “as a testimony of respect for the talents, virtues and signal services of General La Fayette in the great cause of freedom.” In 1832, nine acres of land were purchased on “College Hill,” across Bushkill Creek from Easton.  Classes began in a rented farmhouse on May 9, 1832, and Lafayette College moved into its first building on its new land two years later, in 1834 – the same year that its namesake, the Marquis de Lafayette, died at the age of 76.

Its founder, however, survived to see his dream grow and flourish.  James Madison Porter died on November 11, 1862, with Lafayette College well-established as not only part of the Easton area, but a respected private liberal arts institution.  In 1997, the Porter Society was established to recognize the commitment and generosity of alumni and friends, and continue the legacy of a man with a vision.

To learn more about Lafayette College, visit The Lafayette Story