In early 1822, the Lehigh Coal and Navigation Company was incorporated, combining the two previous joint-ventures of founders Josiah White and Erskine Hazard.  Downriver traffic was flowing rapidly on the Lehigh Navigation, carrying anthracite coal from the mines near Mauch Chunk to the markets at Easton.  In 1822 alone, 2240 tons of coal were sent down the canal – by 1825, the number was over 28,000 tons. 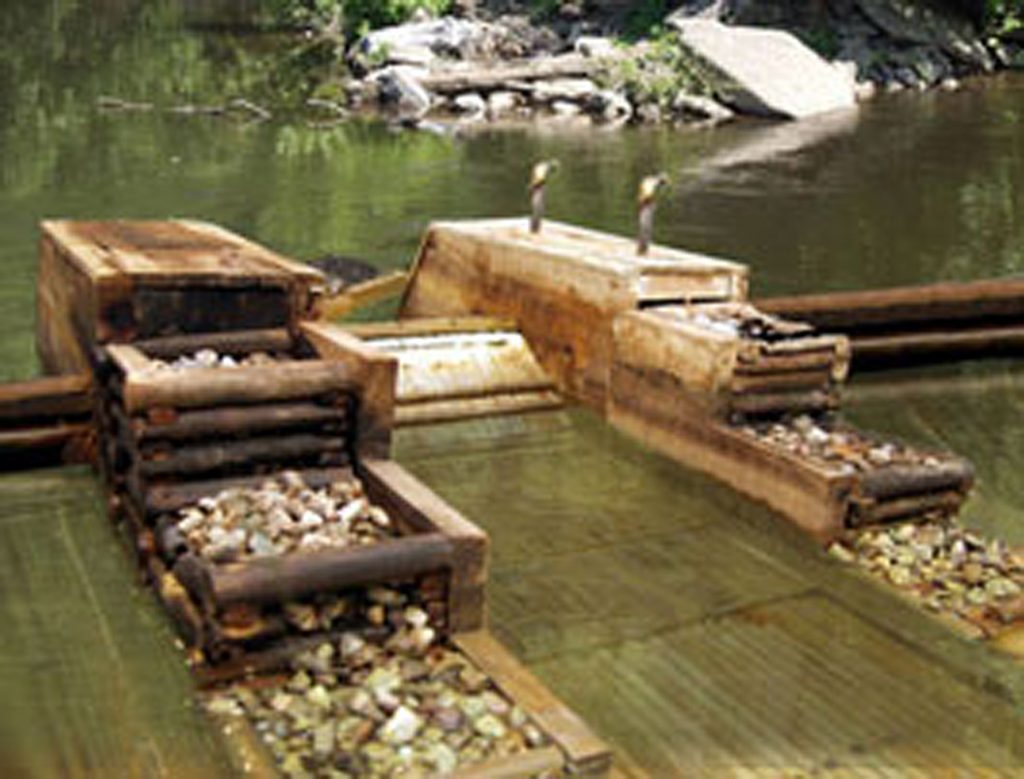 The original Bear-Trap Lock design on the canal was designed to overcome the elevation drop between Mauch Chunk and Easton. Loaded boats, or “arks” staged in flooded pools of water created by the dams. When the lock gates opened, the arks floated out on the rush of water, which carried them down stream to the next dam.

With this increase in traffic, however, came an industrial and environmental issue: a lumber shortage.  In the early years of transport on the Lehigh Navigation Canal, boats did not make the return journey to Mauch Chunk.  The descending navigation system, with White’s Bear Trap Lock designs, meant that a new “coal ark” was required for each load of coal sent down the canal.  These “arks” were described as “square-cornered boxes from sixteen to eighteen feet and from twenty to twenty-five feet long,” and simply loaded with coal and floated down the canal, steered by long oars or “sweeps.”

The boats were designed to be quickly assembled, with jointed planks cut in such a way that skilled craftsmen could put together an entire ark in less than an hour.  Upon arrival, the boats were taken apart and the lumber sold at market, resulting in a profit for the company.  Profit aside, however, the sheer amount of lumber required to keep the coal flowing was rapidly stripping the timber forests in the Lehigh Gorge and Pocono regions.

Below, a receipt for “two hundred and fourteen acres and 140 perches” of land in Northampton county,” dated 1822, shows the vast land resources being purchased by the Lehigh Coal and Navigation Company to keep their business running. 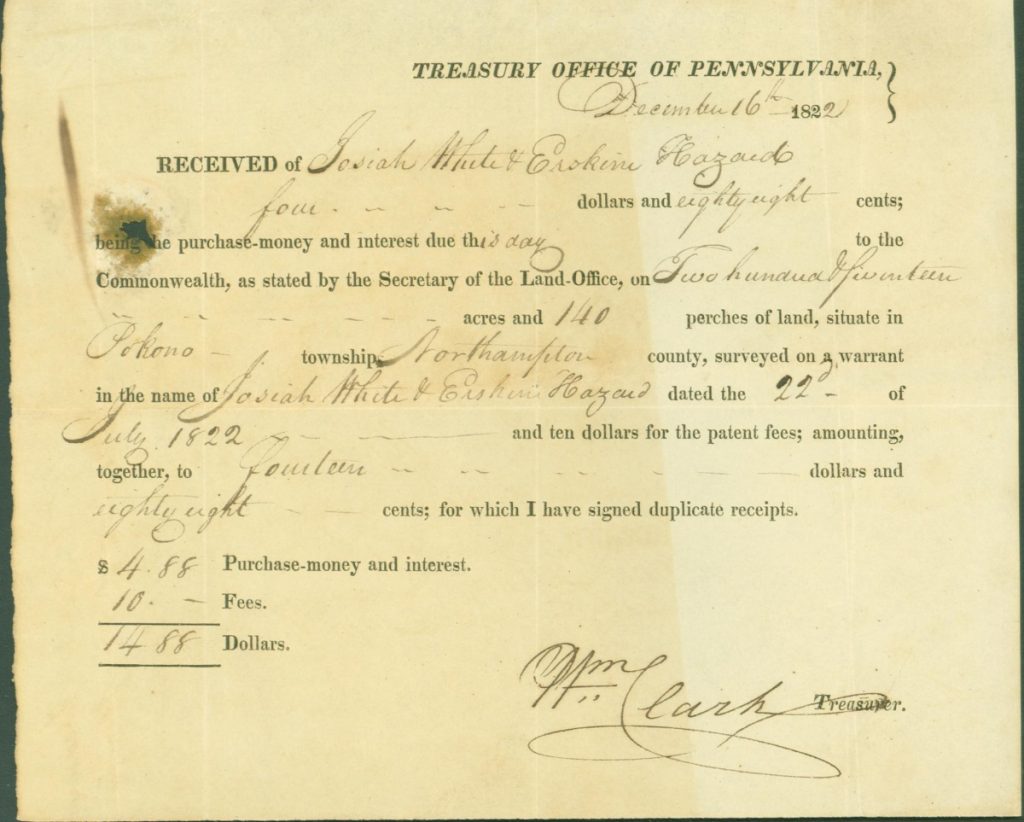 RECEIVED of Josiah White & Erskine Hazard fourteen dollars and eighty-eight cents; being the purchase-money and interest due this day to the Commonwealth, as stated by the Secretary of the Land-Office on Two hundred & fourteen acres and 140 perches of land, situate in Pokono township, Northampton county, surveyed on a warrant in the name of Josiah White & Erskine Hazard dated the 22d of July, 1822, and ten dollars for the patent fees; amounting, together, to Fourteen dollars and eighty-eight cents; for which I have signed duplicate receipts.

By 1825, more than four hundred acres of pine forest were disappearing into the coal industry per year.  It soon became evident that the construction of a new boat for each load of coal was entirely unsustainable as a business model, to say nothing of the environmental impact.  In 1826, Lehigh Coal and Navigation commissioned Isaac Chapman to map the Lehigh River as the first step in constructing a two-way canal and slackwater navigation.  The improved navigation system would utilize lift-lock technology in use on the Erie Canal, along with building techniques that used the natural terrain to their advantage.  Under the supervision of engineer Canvass White, the rebuilt Lehigh Navigation system was begun in 1827 and opened in June of 1829, allowing two-way navigation – and the mule-drawn canal boats we know today!  If you would be interested in taking a ride on our own Josiah White II replica canal boat, click here for more information.