“A Kiss From France” – a Message From a WWI Soldier

“A Kiss From France” – a Message From a WWI Soldier

In 1954, President Dwight D. Eisenhower designated November 11th as Veterans Day, a day for Americans to honor all military veterans, living and dead, for their service to our nation.  Before then, the date was known as Armistice Day, commemorating the moment when the guns of World War I were silenced at the eleventh hour of the eleventh day of the eleventh month in 1918, ending the worst carnage than all the wars in Western history combined up to that time.

The United States military was only actively involved in the conflict since the spring of 1917. Nevertheless, more than 116,000 American soldiers had died, so the end of combat was greeted with exuberant celebrations all over the country. Many people believed that their husbands, fathers, sons, and brothers would be home by Christmas. 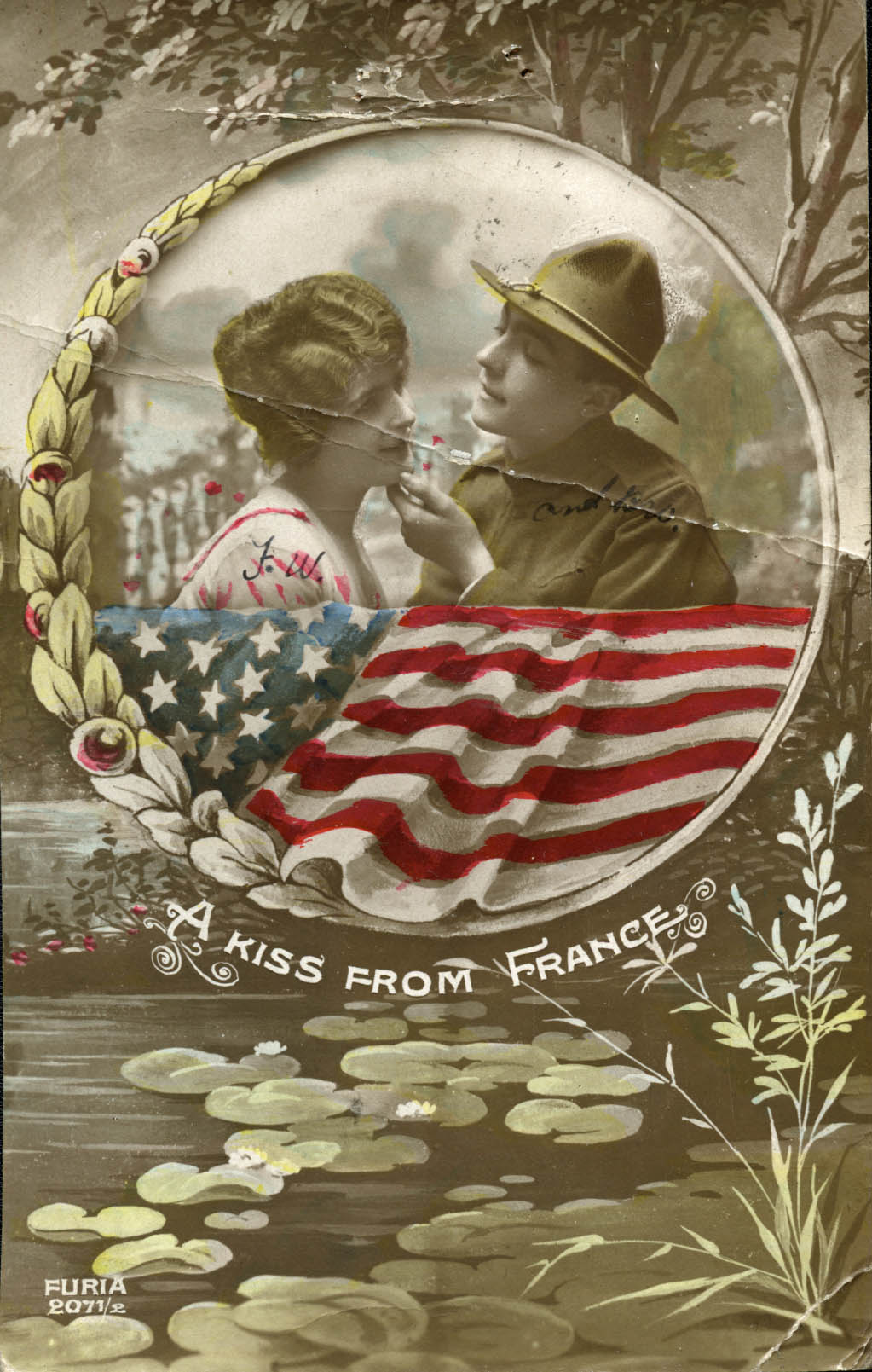 “A Kiss From France” postcard. While postcards like these were likely designed to be sent to a sweetheart, Fred carefully designated the “kiss” to be a brotherly one to his sister back home. Scroll to the bottom to see the reverse message

But as this postcard sent to his sister Florence rather poignantly reveals, Fred Weller, a soldier from Stewartsville, New Jersey, was still in France in late January, 1919.  And this may have been the first time he was able to let his family know that he was alive and well.  Still, he took care to show he was sending a brotherly kiss, labelling the lass on his card with his sister’s initials, and naming the soldier “the bro.”

Getting all “the boys” home quickly was complicated by the fact that the Central Powers (Germany, Austria-Hungary, the Ottoman Empire, and Bulgaria) collapsed so quickly between late September and early November, 1918. The army commanders of the Allies (France, the United Kingdom, Russia, Italy, and the United States) were taken a bit by surprise at Germany’s abrupt acceptance of the Armistice.  Since the Armistice merely marked a cessation of hostilities, and not full surrender,U.S. General Pershing and his Allied commanders were not inclined to withdraw troops from the front quickly. So, demobilization did not start immediately.

The questions of who got to go home first roiled military authorities for months, though soldiers who were coal miners, railroad workers, and railway mail workers were sent home quickly – meaning the Lehigh Valley likely got many of their “boys” back quickly!  There was also the logistics of moving three million soon-to-be-ex-soldiers back across the Atlantic, many of whom were suffering from terrible physical and psychological injuries.  This task was further complicated by the deadly influenza epidemic that was raging around the world, and an American economy that was rapidly sliding into recession.

We don’t know what Fred’s life was like after he returned home.  We do know about his sister Florence, though.  At the age of only 15, Florence married Reuben Metz in 1920 and had a baby they named Earl. Earl’s son put the postcard into the archives collection of the National Canal Museum.  His name: Lance Metz, longtime NCM historian. 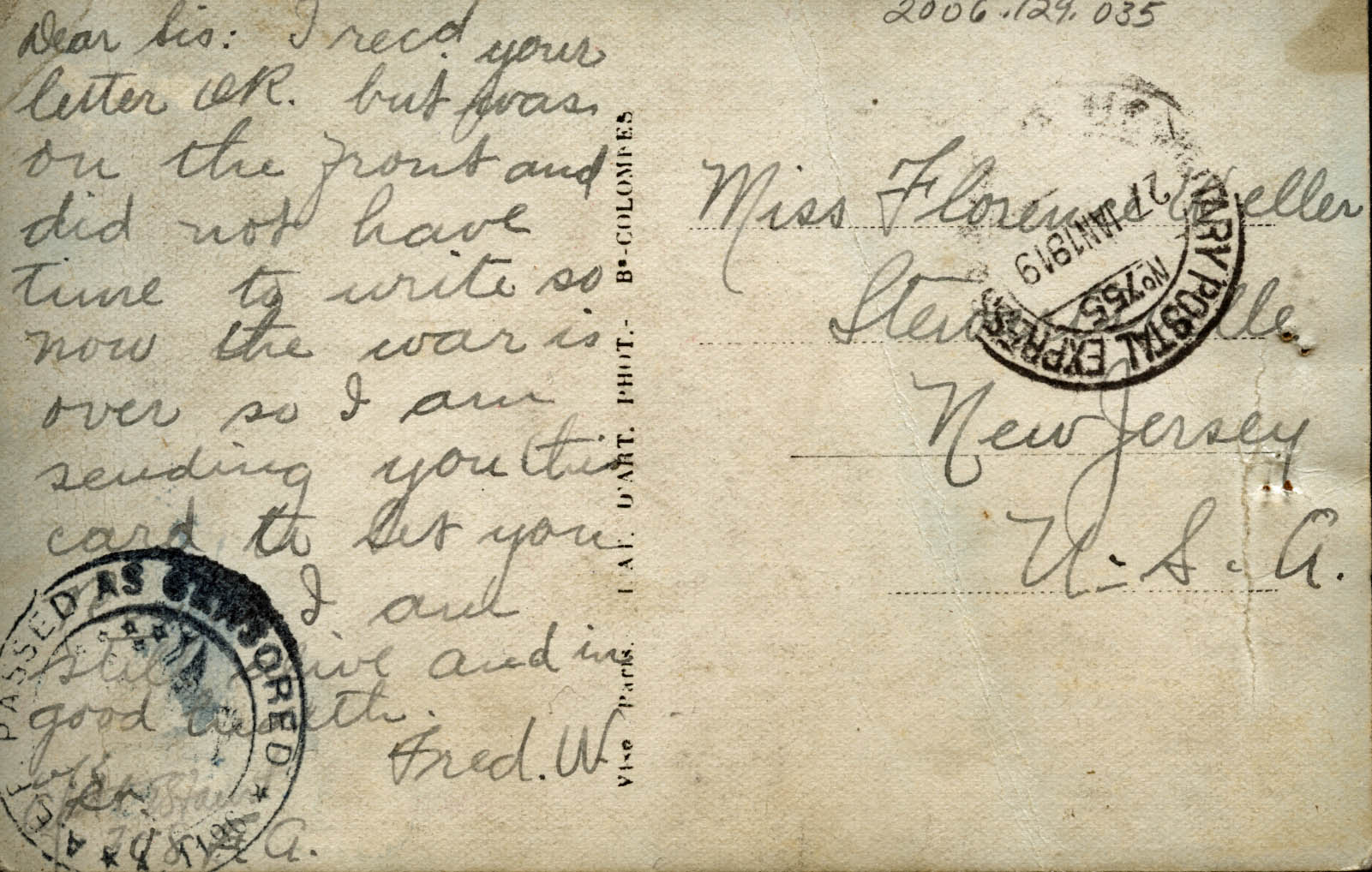 Short messages like these were common in postcards from the front. For families who hadn’t heard from their loved ones for weeks or months, the reassurance that they were still alive and unharmed spoke volumes in only a few words. Message reads: Dear Sis:  I rec’d your letter OK.  but was on the front and did not have to to write so now the war is over so I am sending you this card to let you know I am still alive and in good health.