In honor of all the wordsmiths who were born, live, or work in the Corridor, we share the life AND works of Stephen Vincent Benét, a writer from the Corridor who was “more widely read than Robert Frost [or] T.S. Eliot” during his lifetime (Poetry Foundation). His name may not be as widely known as Frost or Eliot today, but Benét’s works still hold the power to enthrall the reader and transport them to the mythical America of the frontier days. 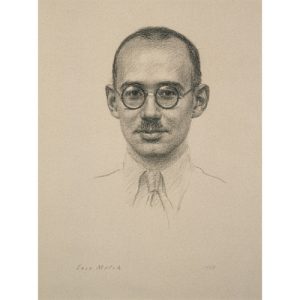 Benét was born in Fountain Hill, Pennsylvania in 1898, although some sources state that he was born in the neighboring town of Bethlehem. He grew up in an intellectual and literary family that most certainly inspired his early start in writing. His first award came at the age of 13 for a poem he wrote for St. Nicholas Magazine. His prolific body of work includes The Ballad of William Sycamore, John Brown’s Body, and The Devil and Daniel Webster. With the poem William Sycamore (1922), Benét added to the American mythology of those larger-than-life pioneer figures like Davy Crockett and Daniel Boone.

In 1925 he requested a grant from the Guggenheim Foundation to write a historical poem about the Civil War. He received the grant – the first grant ever awarded for poetry – for $2,500 (the equivalent of $40,000 today) and wrote John Brown’s Body, a 15,000-line epic that catapulted his status as a poet. Benét received the Pulitzer Prize for this work in 1929 and was also elected into the National Institute of Arts and Letters.

Throughout the 1930s, he continued writing and publishing short stories, novels, and poems, was elected into the American Academy of Arts and Letters, and became editor of the Yale Series of Younger Poets. The Devil and Daniel Webster, first published in 1936 in the Saturday Evening Post and the next year in Benét’s short story collection Thirteen O’Clock, is among his best-known writings.

Plagued by poor health his entire life, he ultimately succumbed to a heart attack in 1943 at the age of 44. In his short life he earned countless awards and accolades, including three O. Henry Awards for An End to Dreams (1932), The Devil and Daniel Webster (1937), and Freedom’s a Hard-Bought Thing (1940). His second Pulitzer Prize came in 1944, awarded posthumously for an unfinished narrative poem about the settling of America called Western Star.