H.D.: the Life of the Lehigh Valley’s Most Important Literary Figure, a Free-Love Feminist Poet 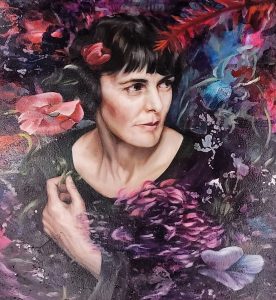 Hilda Doolittle, a major feminist poet in the early 20th century Modernist movement, was born in Bethlehem in 1886 into a family with deep Moravian roots. In 1907, while living in Philadelphia, she became engaged to Ezra Pound, one of the founders of the Modernist arts movement, despite her family’s vehement opposition. The engagement ended the next year when Pound moved to Europe, and Hilda began a relationship with Frances Josepha Gregg, a student at the Pennsylvania Academy of Fine Art. In 1911, she travelled to Europe with Gregg and Gregg’s mother. However, Hilda soon developed a romantic relationship with a British woman, Brigit Patmore, and they moved to London.

There, Hilda reconnected with Pound, who was part of an avant-garde literary community that included D.H. Lawrence, Richard Aldington, T.S. Eliot, and Virginia Woolf. Pound promoted her poetry and had her sign her first published works at “H.D., Imagist,” as the members of the circle styled themselves.  Abandoning her family name professionally accelerated H.D.’s feminism; she had long been rebelling against the Victorian restrictions that women such as her mother, who had aspired to be an artist but was prevented from doing so by her father and husband, had been bound by.

But the trauma and losses caused by World War I colored H. D’s life for decades afterwards. Married to Aldington, she gave birth in 1915 to a stillborn daughter, a devastating loss she blamed on shock after hearing about the torpedoed Lusitania.  H.D. took over the editing of the group’s literary magazine while Aldington fought in France. The trauma he suffered, as well as the combat death of H.D.’s brother Gilbert, damaged their marriage, and she became pregnant during a brief relationship with the composer Cecil Gray. 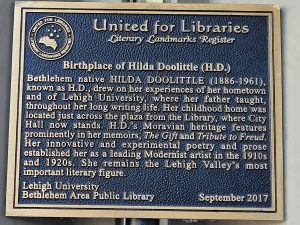 A plaque from United for Libraries, the Literary Landmark Register. It outlines the Birthplace of Hilda Doolittle (H.D.) and says: “Bethlehem native Hilda Doolittle (1886 – 1961), known as H.D., drew on her experiences of her hometown and of Lehigh University, where her father taught, through her long writing life. Her childhood home was located across from the Library, where City Hall now stands. H.D.’s Moravian heritage features prominently in her memoirs, The Gift and Tribute to Freud. Her innovative and experimental poetry and prose established her as a leading Modernist artist in the 1910s and 1920s. She remains the Lehigh Valley’s most important literary figure.” (Lehigh University, Bethlehem Area Public Library. September 2017).

In the autumn of 1918, estranged from both men, impoverished, and severely ill in the influenza epidemic, H.D. was rescued by the wealthy English novelist Bryher (Annie Winifred Ellerman), who became her long-term lover and companion. (Bryher is now thought by some scholars to have been transgender.) Her daughter, Frances Perdita Aldington, was born in March 1919. In 1921, Bryher married the young American expatriate publisher Robert McAlmon. It was purely a marriage of convenience to financially support McAlmon’s Contact Editions publishing house, which printed early works by Hemingway, James Joyce, Gertrude Stein, Ford Maddox Ford, and H.D. herself.

Bryher, McAlmon, and H.D. shared a sexual as well as a business relationship; the latter survived Bryher and McAlmon’s divorce in 1927. Shortly afterward, Bryher married H.D.’s lover, Kenneth Macpherson, and the three lived and travelled together in what a friend dubbed “a menagerie of three” which became four when Bryher and MacPherson adopted Perdita while they lived in Switzerland. (Perdita Macpherson [1919-2001] went on to live her own long and colorful life.)

By the late 1920s, H.D.’s poems and novels focused on female empowerment, her literary barbs aimed at the patriarchal arts sphere she inhabited. Her works in this period are largely autobiographical and explore the internal and intrapersonal conflicts raised by her bisexuality. In 1933, she sought psychoanalysis with Sigmund Freud, who, after several sessions, demanded that she address her wartime losses by writing about them; the result was her novel Bid Me to Live.

After spending World War II in London, H.D. and Bryher decided to live apart in 1946, though they remained close for the rest of their lives. H.D. moved to Switzerland, where she produced one of her most important works, Helen in Egypt. The novel, a re-interpretation of Euripedes’ play Helen, is a feminist take on the causes of the Trojan war and all modern wars. In the same period, she wrote Winter Love, a retelling of The Iliad and The Odyssey as narrated by Penelope, the wife of Odysseus.

In 1960, H.D. made her final visit to the United States to be the first women awarded an American Academy of Arts and Letters medal- the only person with connections to the Lehigh Valley to have received such an honor. The following year she suffered a stroke and died in Switzerland. Her ashes are interred in the Doolittle family plot in Niskey Hill cemetery in Bethlehem. A blue PHMC marker on Church St. notes that City Hall now stands on the site of the house where she was born.

More information about the life and work of H.D. and a selection of her poems can be found at: https://www.poetryfoundation.org/poets/h-d.