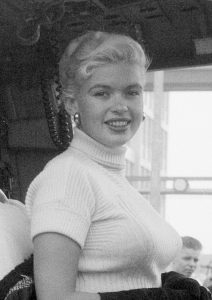 Every March and September here in the Lehigh Valley, we celebrate the Celtic folks—Welsh, Irish, Scots, and Cornish—who loom large in our 19th century industrial history. It’s important to know how these (mostly) men contributed to the transportation, heavy industry, and educational institutions that laid the foundations for the ways we live here now.

But likely the most famous Celtic descendant from the Lehigh Valley was not a man, but an intelligent, voluptuous, self-described “blonde bombshell” whose Cornish ancestors quarried slate in Pen Argyl—Jayne Mansfield.

“Jayne does indeed have an impeccable Pen Argyl/Cornish/slate industry pedigree,” says Melissa Hough, director of the Slate Belt Heritage Center in Bangor. Her great-grandparents originated near Delabole in Cornwall, (still the site of the largest slate quarry in Europe), where they worked as slaters; Jayne’s male relatives took up the same work in Pen Argyl. 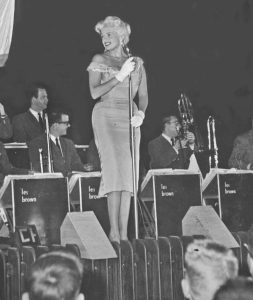 Born Vera Jayne Palmer in 1933, she lived in Phillipsburg until age 6, when her widowed mother remarried and they moved to Texas. There were many visits to grandparents and other relatives back in Pen Argyl though, and “there are distant cousins and now-aged neighborhood boys who still tell stories about her visits to the Slate Belt,” says Hough.

Despite being a good student and multi-talented performer, at 17 Jayne married Paul Mansfield because she was pregnant. They studied serious acting with some of the best teachers in the US, but it was Jayne’s pin-up spread as the February 1955 Playmate of the Month in Playboy magazine that launched her career. Hollywood’s studios were looking for their very own version of Marilyn Monroe, and Jayne became famous as a good, versatile actress who was willing to do anything—and shed any clothes—for publicity.

According to Wikipedia, by 1960, Mansfield had topped press polls for more words in print than anyone else in the world, had made more personal appearances than a political candidate, and was probably the world’s most-photographed Hollywood celebrity. Tragically, alcohol, mostly-true gossip about her multiple marriages and chronic promiscuity, and her over-the-top publicity-seeking behavior wrecked Mansfield’s reputation and career in Hollywood.

Reduced to appearances in small clubs around the country, on June 29, 1967, Mansfield, her lawyer/boyfriend and their driver were killed instantly in a late-night collision with the back of a truck on a rural road in Louisiana. Her three young children, Zoltan, Miklos, and Mariska Hargitay, who were asleep in the back seat, survived with minor injuries.

Mansfield was buried in Fairview Cemetery in Pen Argyl, near the quarry sites where her ancestors worked. Her white marble heart-shaped tombstone bears an inscription by her second husband, Mickey Hargitay: “We live to love you more each day.” 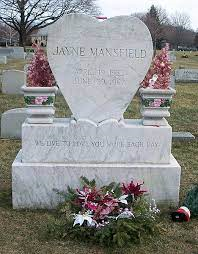