Hexenkopf—even the name is chilling. So is the atmosphere there—which some folks attribute to lurking evil spirits… or maybe it’s just because it’s one of the highest points in Northampton County.

Hexenkopf means Witch’s Head in German, the language everyone spoke in Williams Township in the 18th and early 19th centuries. The rocky outcrop does resemble the stereotypical profile of a witch, and it glows eerily in moonlight because of the mica embedded in the rock. 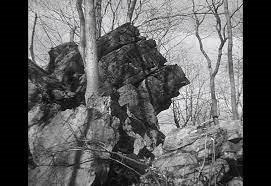 An image of the rock formation that gives the site its namesake.

But the real reason for its reputation as a haunted, dangerous place, a domain of demons and witches, came out of a traditional medical practice common among the German immigrants that they called braucherei, but which became known in Pennsylvania as pow-wowing.

In his book Hexenkopf: History, Healing, and Hexerei, Northampton County historian Ned D. Heindel writes that pow-wowing regards “illness as the work of the devil, an evil manifestation to be expelled by charms, herbs, manipulations, and incantations.”  Healers were respected as devoutly religious people, who had the power to draw evil from the ill person and transfer it to another place. “For the pow-wowers of Williams Township that receptacle was Hexenkopf Rock.” Thus, the Hexenkopf  became associated with sickness, danger, and death for the residents of Williams Township.

The opposite of the saintly pow-wow healer was the hexen–a person believed to cast demonic spells on people, wreaking havoc with their lives and property. As in every society of believers in evil spirits and those who consorted with them, the Germans feared and shunned people—usually women–they suspected were hexen. Hexen were thought to frequent the Hexenkopf, particularly on nights associated with the souls of the dead—Halloween and November 2, All Soul’s Day, and on April 30, known as the Witches’ Sabbath Eve, or Walpurgisnacht.

The earliest “credible” account of eerie activity on Hexenkopf is found the Matthew Schropp Henry’s 1860 History of the Lehigh Valley. Henry took great pains to use what we now call primary sources. In the preface he writes that he pored over early newspapers, letters, and official records. He names the many eyewitnesses to past events he spoke to while researching the book, as well as the prominent men who had initiated and were still driving the industrial development of the region.

But his informant who allegedly witnessed witches dancing hand-in-hand around a tree at Hexenkopf is anonymous. Henry quotes the verses they chanted before discovering the intruder, whereupon they shrieked a curse, and “were all instantly seated upon broomsticks, and rode away at a speed exceeding that of forked lightning.”

Be merry, the fiends are roving now! And death is abroad on the wind,

Join hands in the dance, to-morrow’s light full many a corpse shall find;

Our sisters are out, on mischief bent, the cows their milk shall fail,

The old maid’s cat shall be rode to death, and her lap-dog lose his tail,

The farmer in vain shall seek his horse, who fasten’d his stable-door

With lock and with belt, if he has not nail’d a horseshoe firmly o’er.

Skeptics will note that Henry’s eyewitness must have had a prodigious memory to record all six verses of the witches’ song, and that no version of the original lyrics, presumably in German, has ever been produced.

Still, there’s no doubt that owning Hexenkopf and the surrounding hilly landscape has coincided with bad luck for many of the folks who have owned it over the past 250 years, notes Professor Heindel. Many people who lived on the slopes of the hill lost their properties and the land has never been used commercially with much success. The rock and its surroundings have been seized and sold at tax auctions at least five times. Several owners died prematurely, without wills, and their estates were bitterly contested. The owner before the Heindels tried to sell the hill for forty years, then died suddenly, intestate, while under federal indictment for dumping toxic waste; the legal wrangling took years to settle. Heindel notes that even in the second half of the 20th century, several freak accidents occurred on or near the hill, some of which were fatal to people and livestock.

Despite the rock’s sinister reputation, it became popular as a hiking spot for families, school groups and Scout troops by the early 20th century. Now it is recognized as one of the most important natural areas in Pennsylvania. The Hexenkopf rocks are among the oldest exposed rocks in the U.S., and the area on the hillsides and below is home to a unique variety of plants, animals, and aquatic life. Vernal pools and wetlands at the base of the hill put water into Fry’s Run.

Since buying a house and barn on the hill in 1967, the Heindels  gradually expanded their holdings to about 140 acres. In 2020 they donated 76 acres to Northampton County to be preserved as the Hexenkopf Ridge Preserve. No need for visitors to fear, Ned Heindel told the media covering the announcement. “The witches seem to have retired a long time ago.”