Special Thanks to Ken Raniere 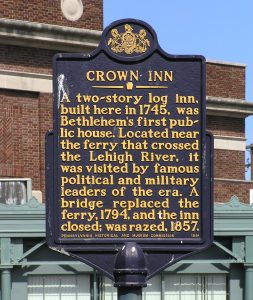 Viewers of the seemingly infinite universe of cable network shows devoted to the paranormal may have spotted a Bethlehem landmark near the Hill-to-Hill Bridge in a recent episode. A tiny notation about a cemetery on the south bank of the Lehigh on an 18th century map attracted a TV crew to the Southside earlier this year to investigate reports of spectral voices and weird occurrences in that neighborhood.

Actually, there was a “lost cemetery” nearby, says Ken Raniere, who has written extensively on South Bethlehem’s history. But not quite where the TV folks thought it was.

“In the early days of the Moravian settlement in Bethlehem, non-Moravians were not allowed to spend the night in the community,” he says. “So, in 1745 there was an inn for them built on the other side of the river, right alongside the ferry that crossed the Lehigh.”  Originally simply called the ‘public house,’ it later was named the Crown Inn.

Only a few months after the second innkeeper Frederick Hartmann arrived, his wife died there in January 1747. In his 1903 history of Bethlehem, Moravian bishop Joseph Levering wrote that she was buried on a “near-by hill on the south side. A special burial ground was then opened for the accommodation of the vicinage and for emergency use in connection with the public house…It was in use until 1763. Of the seventeen recorded interments, ten were the bodies of Indians.”

One of those ten was William, the young son of Tatamy, a Turtle Clan Lenape who had converted to Christianity and had acted as a translator between the Lenape and the English-speakers. In 1757, William died after being shot by a young white settler near Bethlehem. His funeral was attended by over 200 Lenape, and stories about the incident were repeated in several early histories of Bethlehem. 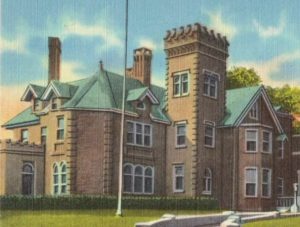 An image of Wilbur Mansion.

In William C. Reichel’s the Crown Inn, he locates the graveyard on “rising ground” near the intersection of Ottawa (now Cherokee St.) and non-existent Second St. (Lenape St.) several yards south of Brighton St., says Raniere. In 1903, Levering noted that the site could no longer be located accurately. But in 1900, when Warren A. Wilbur built his carriage house a short distance west of Cherokee St., human bones were uncovered while digging at the foundation. The bones were handed over to a physician, who re-interred them elsewhere on the hill nearby, which was then all open land.

Whose bones they were, and where they are now is a mystery.

And that, as a famous late radio personality used to say, is the rest of the story.