In December of 2021, the National Canal Museum received a grant from the National Endowment for the Humanities to hire a Diversity Research Historian for one year. Diversity can mean a number of things and this grant was going to allow us to expand the stories we tell about both women and canallers. The grant work was two part: a special exhibit: Beyond Rosie & Rivets: Industrial Women of the D&L Corridor and researching Black canallers who worked on the anthracite canals. The Diversity Research Historian joined the team in January of 2022 and quickly got to work.

Beyond Rosie & Rivets: Industrial Women of the D&L Corridor opened on April 1, 2022. The exhibit covers nearly 200 years of industrial women’s history in the D&L’s 5 counties: Luzerne, Carbon, Lehigh, Northampton, and Bucks. The exhibit covered the industrial work of women in 7 industries. Those industries are Canals, Silk, Cigars, Steel, the Needle Trade, Dixie, and Transistors. In almost all of the industries women dominated the workforce. It also discussed recurring themes around legal protections versus constraints, unionization, and education as opportunity. 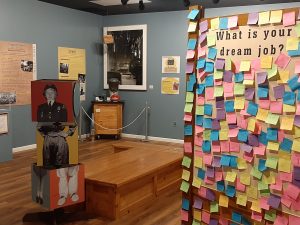 One of the two interactive areas are the “talk back” board that asked, “What is your dream job?” The talk back board was a particular favorite of both visitors and staff. We also added spinning cubes with full body images of women in uniforms that allow visitors to mix-and-match the uniforms or using the mirror that replaced the face of one of the women, which lets visitors see themselves in the uniforms.

After Beyond Rosie & Rivets opened the second part of the grant started. Over several months and with the help of a graduate student intern and our collections manager, census records of counties along the anthracite canals were searched looking for Black citizens who were listed doing canal related work. Those that were found were mostly, “boatmen”, but also “captains”, and “locktenders.” Using some oral histories, we were able to identify others, including some women who were not listed in the census as working. All told, we were able to identify over 170 Black canallers.

Two permanent projects came out of this research. In the National Canal Museum’s main exhibit space is a pull up banner that highlights Black canallers. It has two short biographies and a heat map to show their population concentrations in the region. It also includes a QR code that links to our other project, an interactive map on our website.

“’There was quite a few, but I can’t remember their names’: Finding the Black workers of the anthracite canals” is an interactive map that includes the name and location of every Black canaller we were able to find. The canallers are broken into 4 maps: Delaware Canal and Lehigh Navigation, New Jersey Canals, Delaware and Hudson Canal, and Other Pennsylvania Canals. Each canaller’s entry shows an image of where we found the information that identifies that person as a canaller. For every map there is an associated biography. Two are the same as on the pull-up banner and two are found only on the interactive map.

This year’s work has been rewarding for both our Diversity Research Historian and the National Canal Museum. Researching and presenting stories of industrial women and Black canallers has helped us see our region differently. This project has reminded us that there is always more to uncover.