Remembering A Time When Coal Was King 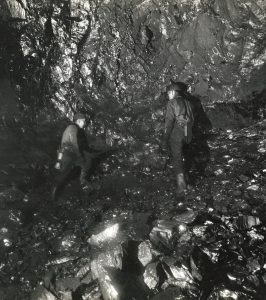 Men mining the No. 8, Mammoth Vein in 1953. Photograph by George Harvan

Anthracite Mining Heritage Month (AMHM) is a regional observance dedicated to celebrating anthracite coal, the role it played in the Industrial Revolution, and the history and culture of the Anthracite Coal Region of Northeastern Pennsylvania. It began in January 1999 with the 40th anniversary program of the Knox Mine Disaster, which was held at the Anthracite Heritage Museum in Scranton. Within a few years, other organizations joined in presenting anthracite-related programs. Before long, it evolved into Mining History Week and later, Mining History Month. In 2017 it was officially named Anthracite Mining Heritage Month, though it also still goes by Anthracite Mining History Month. The commemoration of the lives lost at the Knox Mine in 1959 remains the central event of the month.

Anthracite coal revolutionized America, literally fueling the Industrial Revolution in the United States. The coal mining industry was the major driving force for modernization and brought with it power, light, heat, and work. And where was the center for this force located? Pennsylvania’s Coal Region, in the counties of Carbon, Columbia, Lackawanna, Luzerne, Northumberland, and Schuylkill, with a sliver of coal reserves in Dauphin County. This region contains the world’s largest reserves of anthracite coal. Even though the area was mined heavily in the 19th and 20th centuries, it is estimated that over 7 billion short tons of minable reserves still exist in the Coal Region. 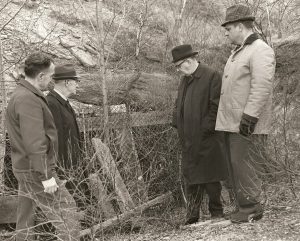 Men stand outside the Eagle Air Shaft, where 33 miners escaped during the Knox Mine Disaster. Photo from 1959 or 1960.

In the past, there have been several AMHM events each year that commemorate the Knox Mine Disaster, which occurred on January 22nd, 1959. On that day, miners at the River Slope mine of the Knox Coal Co. broke through to the bed of the Susquehanna River, sending billions of tons of water surging through the mine system. Of the 81 men working in that mine on January 22nd, most either escaped immediately or were rescued within hours. 12 drowned. The mine flooding halted operations at over a dozen other coal companies in the Wyoming Valley. Though anthracite production was already in decline – and had been for decades – the Knox Mine Disaster stands as a symbol of the beginning of the end of deep coal mining in the Coal Region. You can learn more about the Knox Mine Disaster in our blog, When the River Rushed In.

Every January local historical societies, museums, universities and schools, and mining organizations all work together to create and present programs on the coal mining industry. Anthracite Mining Heritage Month is how the people of the coal region remember and celebrate a time when coal was king.