Resurrection of a relic of the past 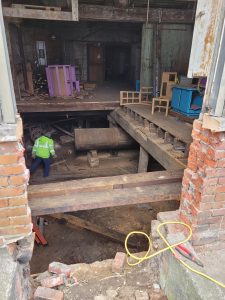 An antique, rivet-studded iron boiler tank was carefully pulled out of the cellar of an old factory in Allentown on January 10.  It was a precise inch-by-inch operation that needed all the skills of a team of riggers and a crane operator. Our historian, Martha Capwell Fox was part of a small but passionately interested set of onlookers who held their collective breath as the tank—30 feet long and weighing about 2.5 tons—was lifted out of the bottom of the former Buehler furniture factory on Front Street.  With a collective sigh of relief, the tank was secured to a flatbed truck for its first journey in the open air since 1901.

Why was Martha standing in a closed street for hours on a frigid January morning to see this? Because this tank is an important relic of our local industrial history—a history with national significance. The American zinc industry began in the 1840s in Friedensville in the Saucon Valley and in Franklin, New Jersey. Before that, zinc had to be imported from Britain. Zinc is essential for galvanizing metals to prevent rust. Zinc oxide, a basic ingredient in paint and topical medications, was first produced in the U.S. in South Bethlehem in 1852 by Samuel Wetherill. That mill supplied zinc for the Union Army’s shell casings during the Civil War. 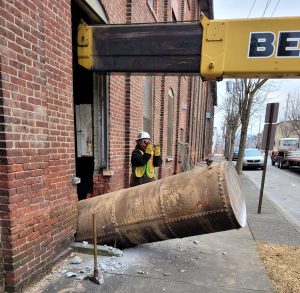 A crane lifts the boiler out of the building

In 1870, the Lehigh Zinc Company commissioned the legendary President Pump, a Cornish-style steam-driven pump that was the biggest in the world, to pump out water that regularly flooded its mine at the foot of South Mountain in Saucon Valley. The tank was one of 22 boilers that made steam to power the pump.

The President Pump was broken up in 1900 and the following year Allentown cabinetmaker Gottleib Buehler bought one of its boilers to use as a water tank in the factory he was building. It was put in the basement, the building erected over it, and it supplied water for the Buehler Parlor Furniture Frame Company and its successor, Bethlehem Atelier, for about a century. 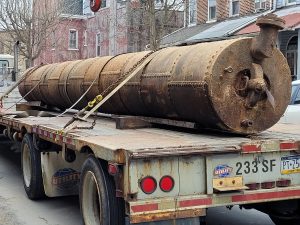 The boiler leaving for its new home after 121 years

The boiler’s provenance as the only surviving piece of the President Pump could have been lost. But the story was passed down to Gottlieb’s grandson, Louis J.G. Buehler. Mr. Buehler, a benefactor of the National Canal Museum, told the museum historian, the late Lance Metz. Metz mentioned it to Mike Piersa, who is now the National Museum of Industrial History’s historian.  When word came that the old factory was scheduled for demolition, NMIH, Lehigh University, and other advocates were able to mobilize to save the boiler. The rest of the story of how the tank was moved and its final destination can be found here: https://www.nmih.org/national-museum-of-industrial-history-applauds-the-recovery-of-an-historic-steam-boiler/ 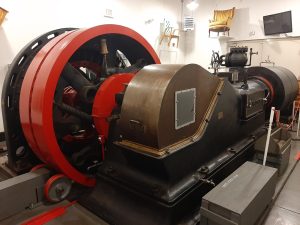 But back to Louis Buehler.  Starting in the 1980s, Buehler began donating artifacts to the National Canal Museum, including original Knoll chairs and other furniture, that were made by his family’s company. They are on display in the museum alongside the restored Harrisburg Skinner Una-Flow steam engine, which generated electricity for the Buehler factory from 1926 to 1956. The engine still functions but is run with a small electric motor instead of having to shovel coal or wood shavings into a boiler (lucky for us!). We’re hoping to operate the engine on a regular schedule when the museum reopens in April.  We are looking for volunteers who can show visitors how it worked. Interested?  Fill out our volunteering form here.

For more information on the Friedensville zinc mines and The President Pumping Engine:  https://www.friedensvilleminesheritage.org