The Beginning of Bethlehem Steel

The Beginning of Bethlehem Steel 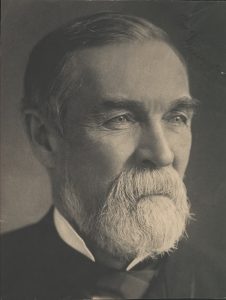 Fritz stepped off a train in Bethlehem with his wife and young daughter on July 5, 1860, after several months of negotiation with Robert Sayre. Sayre, the chief engineer of the Lehigh Valley Railroad, had been charged by his boss, Asa Packer, to build a rolling mill that could produce rails exclusively for their railroad. In 1858, Fritz had patented the three-high rail mill, a revolutionary system for producing strong, durable rails and had turned the Cambria Iron Works into a major iron producer. Now, for the princely sum of $5,000 per year and 40 shares of the company’s stock, Fritz was bringing his patent, his deep experience, and his mechanical genius to Bethlehem Iron.  He was 37 years old.

A string of adversities – the start of the Civil War, the disastrous 1862 flood, shortages of manpower and material – delayed production of the first rails until 1863. Within a few years, Fritz persuaded the company’s directors to move into steelmaking, as steel rails replaced iron on transcontinental tracks. Never a strong believer in the Bessemer steel process, Fritz introduced the slower, but more versatile, open hearth steelmaking process to Bethlehem in the 1880s

Fritz tried unsuccessfully to turn Bethlehem to making structural steel or plate.  His push to diversify their products finally got a boost when Congress decided to upgrade the obsolete U.S. Navy in the 1880s.  This triggered a competition among several steel companies to move into heavy forging for making armor plate and guns for battleships, which Bethlehem won.  “The massive expansion was a gamble on the part of Fritz, but his decision – backed by directors Robert Sayre, E.P. Wilbur, and Joseph Wharton – ensured the long-term viability of the company when the other iron companies in the Lehigh Valley, primarily merchant pig iron producers, were doomed to shut down,” write Ann Bartholomew and Donald Stuart Young in Bethlehem Steel in Bethlehem, Pennsylvania. Bethlehem Iron became the biggest defense contractor in the U.S., and Fritz’s work in heavy forging laid the foundation for Charles Schwab’s Bethlehem Steel’s pivotal role in arming the Allies in World War I.

Fritz retired from active work in 1892 at age 70.  But he continued to take an active interest in the industry, and personally designed and funded the construction of the Fritz engineering laboratory at Lehigh in 1909. He died in Bethlehem at 90 in 1913, and is buried in Niskey Hill Cemetery.

The archives of the National Canal Museum and the D&L are collaborating with the National Museum of Industrial History in Bethlehem on their exhibit “The Works of a Mechanical Genius: The Legacy of John Fritz,” celebrating the 200th anniversary of his birth.  It is scheduled to open this fall at NMIH.

Death of a Giant: 25th Anniversary Commemoration of the “Last Cast” at Bethlehem Steel